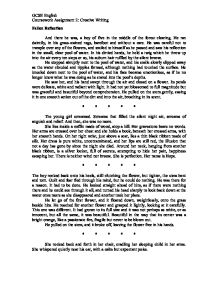 Fallen Reflection And there he was, a boy of five in the middle of the forest clearing. He ran daintily, in his grass-stained rags, barefoot and without a care. He was careful not to trample over any of the flowers, and smiled to himself as he passed and saw his reflection in the small, clear pool of water. In his dirtied hands, he held a twig which he threw up into the air every ten steps or so, his auburn hair ruffled by the silent breeze. He stopped abruptly next to the pool of water, and his smile slowly slipped away as the water clouded and ripples formed, although nothing had touched the surface. He kneeled down next to the pool of water, and his face became emotionless, as if he no longer knew what he was doing as he stared into the pool's depths. He saw her, and his hand swept through the air and closed on a flower. ...read more.

There is neither wind nor breeze. She is perfection. Her name is Hope. * * * * * The boy rocked back onto his heels, still clutching the flower, but tighter, the stem bent and torn. Guilt and fear fled through his mind, but he could do nothing. He was there for a reason. It had to be done. He looked straight ahead of him, as if there were nothing there and he could see through it all, and turned his head sharply to look back down at the water once more as she disappeared and another took her place. He let go of the first flower, and it floated down, weightlessly, onto the grass beside him. He reached for another flower and grasped it lightly, looking at it carefully. This one was different. It had grown to its full size and it was not perhaps as white, or as innocent, but all the same, it was beautiful. ...read more.

One step back and it would stop. One step back and the pain would cease. But he craved it. He craved the rush of energy and adrenaline, he craved the pain. He tilted his head slightly as he listened for the muffled breathing he had heard so many times before. It was there. He gazed down at the pool of water that was clouding once more; a shadow, a blur. Trees, trees exactly like those surrounding the clearing. A little black-haired boy; he was right then. Someone had been watching him, and now, he could see the onlooker. He followed his viewer in the pool of water for several minutes, tracing the black-haired boy's path with his finger, his breathing even and deep. He pulled his finger straight out of the water swiftly, leaving behind only perfect rings in the pool, each smaller than the next. He unclenched his hand and leaned forward onto his knees, reaching for the last pure flower. His fist closed around it. He pulled. It was done. ?? ?? ?? ?? GCSE English Coursework Assignment 2: Creative Writing ...read more.

The style of writing demonstrated in this piece is excellent. A wide variety of sentence structure, vocabulary and punctuation is used to create effects and shape meaning and the whole piece is very powerful.