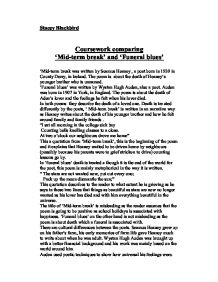 Stacey Blackbird Coursework comparing 'Mid-term break' and 'Funeral blues' 'Mid-term break was written by Seamus Heaney , a poet born in 1939 in County Derry, in Ireland. The poem is about the death of Heaney's younger brother who is unnamed. 'Funeral blues' was written by Wystan Hugh Auden, also a poet. Auden was born in 1907 in York, in England. The poem is about the death of Aden's lover and the feelings he felt when his lover died. In both poems they describe the death of a loved one. Death is treated differently by the poets, ' Mid-term break' is written in an narrative way as Heaney writes about the death of his younger brother and how he felt around family and family friends . "I sat all morning in the college sick bay Counting bells knelling classes to a close. At two o'clock our neighbours drove me home" This a quotation from 'Mid-term break', this is the beginning of the poem and it explains that Heaney waited to be driven home by neighbours (possibly because his parents were to grief stricken to drive) ...read more.

Similarly, Heaney uses metaphor in his poem but perhaps not in such an emphatic and ardent way. "Wearing a poppy bruise on his left temple, He lay in the four foot box as in his cot." This quotation is the only metaphor in the poem and he uses it to describe the bruise on his brothers temple to a poppy. Auden's poem on the other hand has many metaphors and also personification, an example of personification is; "Let aeroplanes circle moaning overhead Scribbling on the sky the message He is dead," This is personification because a aeroplane doesn't actually moan and you associate moaning with grief. The imagery used in the poem 'Funeral blues' is that he describes the grief he is feeling and in it he is very pessimistic as he describes a very depressing scene which is to be expected after you have lost a person near to you. Also 'Mid-term break' does not have any rhyming lines or stanzas as opposed to 'Funeral blues' in which each caplet rhymes. In both poems the themes are death and grief. ...read more.

The poem 'Funeral blues' has four stanzas while 'Mid-term break' on the other hand has seven stanzas. I think the ending of 'Mid-term break' has more impact upon the reader as it is very touching and makes you think how awful it must be to lose a child especially one as young as four, one positive thought is that the reader knows that the child died a very quick death and didn't suffer, the reader knows this because of the line; "No gaudy scars, the bumper knocked him clear". this quotation has been repeated in this essay because I needed to explain my point to the reader of this essay. I think the motivation behind these two poems was the emotional effect of losing someone really close to the poets hearts, poets seem to write about events in their lives that affected them deeply and emotionally as these events give them the motivation to write such thought provoking poems. My opinions of the poems is that they are both rather disheartening and my favourite is 'Mid-term break' because it is a narrative poem and more informal. ?? ?? ?? ?? ...read more.