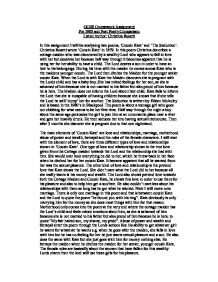 GCSE Coursework Assignment Pre 1900 and Post Poetry Comparison Listed Author: Christina Rosetti In this assignment I will be analysing two poems, 'Cousin Kate' and 'The Seduction'. Christina Rosetti wrote 'Cousin Kate' in 1879. In this poem Christina describes a cottage maiden who was discovered by a wealthy Lord who appears to fall in love with her but deceives her because half way through it becomes apparent that he is using her for her ability to have a child. The Lord desires a son in order to have an heir to his belongings. During his time with the maiden he comes across Kate who is the maidens younger cousin. The Lord then ditches the Maiden for the younger sexier cousin Kate. When the Lord is with Kate the Maiden discovers she is pregnant with the Lords child and has a baby boy. She has mixed feelings for her son, as she is ashamed of him because she is not married to his father but also proud of him because he is hers. The Maiden does not inform the Lord about their child. Kate fails to inform the Lord that she is incapable of having children because she knows that if she tells the Lord he will 'dump' her for another. The Seduction is written by Eileen McAuley and is based in the 1980's in Blackpool. ...read more.

The Cottage Maiden show a lot of emotions in the poem and the poem was written in first person so that the writer can express those feeling better. When you write in first person you can express the emotions as though they are your own and it also makes the poem one sided, as you don't hear any of the lord's point of views. The mood in the poem is grief-stricken and down as the cottage maiden is always speaking with a non-happy attitude until the end where she becomes unconcerned about her cousin Kate's fate with the lord as if that her fault she picked that fate and she got what she deserves and that's that which I think is a bit of a selfish laid back attitude and isn't right. Christina Rosetti uses a lot of imagery to describe the feelings of the cottage maiden e.g. "your love was writ in sand" which doesn't mean that she actually wrote how much she loved him it means that her love wasn't true it was gone before she even meant it. In "The Seduction' Eileen also uses imagery e.g. "with his eyes as blue as iodine" this uses the image of blue iodine but iodine is actually a yellowish brownie colour which also suggests that Eileen was again implying the idea of how drunk the girl actually was. ...read more.

I think the poems are both wake up calls to open our eyes to see the poverty that goes on around us and even though they are set in different times that, message will always need to be heard as poverty is always going to be there whether we like it or not. I respect only the cottage maiden in 'Cousin Kate' because of the way she way mistreated but stayed with the Lord because she of the true love she showed towards him and then when he throws her love away for Kate, she becomes a stronger women and embraces society so that her and her son can live a happy life. Society has change a lot over the last 150 years because now everyone is treated as an equal and it doesn't matter what religion, race or his or her class is, I am not saying that stereotyping doesn't happen as that will always be an ongoing factor of life. In conclusion, we can see that the poems are very similar in there themes as they are both about girls that get seduced into having sex or a sexual relationship. Both poems also have the same moral behind them, get to know the person before you go to far develop a sexual relationship. By Katie Matthews ...read more.