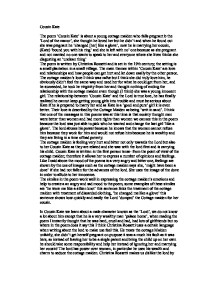 Cousin Kate The poem 'Cousin Kate' is about a young cottage maiden who falls pregnant b the 'Lord of the manor', she thought he loved her but he didn't and when he found out she was pregnant he 'changed [her] like a glove', now he is marrying her cousin, (Kate) 'bound you with his ring' and she is left with no' one because as she pregnant and not married no-one wants to speak to her and everyone where she lives thinks she disgusting an 'unclean thing' The poem is written by Christina Rossetti and is set in the 19th century; the setting is a small plantation in a small village. The main themes within 'Cousin Kate' are love and relationships and how people can get hurt and let down easily by the other person. The cottage maiden's love I think was na�ve but I think she did truly love him, he obviously didn't feel the same way and used her for what he could get from her, and he succeeded, he took he virginity from her and thought nothing of ending the relationship with the cottage maiden even though (I think) ...read more.

sad mood to the poem, some examples of these similes are 'he wore me like a silken knot' this sentence links the treatment of the cottage maiden with treatment of discarded clothing, 'he changed me like a glove' this sentence shows how quickly and easily the Lord 'dumped' the Cottage maiden for her cousin. In Cousin Kate we learn about a male character known as the 'Lord', we do not know a lot about him except that he is a very wealthy man 'palace home', when reading the poem I instantly thought that he was hard, cruel and had, had lots of girlfriends but no where in the poem does it say this I think Christina Rossetti uses a certain language when writing about the lord to make use feel this. He treats the cottage Maiden unfairly, she didn't get herself pregnant on purpose it was a much his fault as it was hers, so instead of leaving her to be a single parent and bring the child up on her own he should take some responsibility and help her instead of ignoring her and marrying her cousin! ...read more.

In the 'olden days' if you were not married and fell pregnant or single and found out that you were pregnant people were appalled, your family would have been ashamed of you and may even have disowned you! So a single parents fate was they would probably have stayed single because people were so disgusted with them, not had many friends and they would have been very poor. The cottage maiden in my opinion is a strong person, obviously she is hurt and upset but she doesn't seem to let what people think about her upset her a lot, she knows that one day the lord will want her child 'to wear his coronet' so she is just waiting for that time. In conclusion, we can see that the poem has a good meaning it maybe sad the beginning as the cottage maiden was treated so cruelly and badly by the lord but in but in the end the cottage maiden will get what she deserves because she knows that her cousin Kate cannot have children so the lord will eventually (maybe) want to marry the cottage maiden because she has a child by him and he will want a son to carry on his family name and business. ...read more.