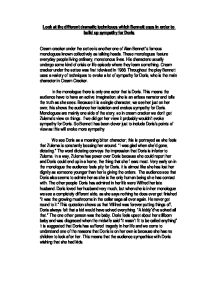 Look at the different dramatic techniques which Bennett uses in order to build up sympathy for Doris Cream cracker under the settee is another one of Alan Bennett's famous monologues known collectively as talking heads. These monologues feature everyday people living ordinary, monotonous lives. His characters usually undergo some kind of crisis or life episode where they learn something. Cream cracker under the settee was first televised in 1988. Throughout the play Bennett uses a variety of techniques to evoke a lot of sympathy for Doris, who is the main character in Cream Cracker. In the monologue there is only one actor that is Doris. This means the audience have to have an active imagination; she is an artless narrator and tells the truth as she sees. Because it is a single character, we see her just on her own; this shows the audience her isolation and evokes sympathy for Doris. Monologues are mainly one side of the story, so in cream cracker we don't get Zulema's view on things. ...read more.

He never got round to it." This quotation shows us that Wilfred was forever putting things off, Doris always felt that a kid would have solved everything. "A kiddy`d've solved all that." The one other person was the baby. Doris feels upset about her stillborn baby and was disgraced when the midwife said "it wasn't fit to be called anything" It is suggested that Doris has suffered tragedy in her life and we come to understand one of the reasons that Doris is on her own is because she has no children to look after her. This means that the audience sympathise with Doris wishing that she had kids. The language that Bennett uses to portray Doris is he uses colloquial language and features of Lancashire dialect; this is used to remind the audience of our own grandmothers. Using this technique helps to create sympathy towards Doris, and also adds more humour to the monologue. Another technique that creates sympathy for Doris is her isolation as she feels physically trapped in her own home with the occasional appearance of dictating Zulema. ...read more.

Doris's lack of freedom has been for a long time and she is a stranger in her own community. 'Don't know anybody round here know more' This quotation suggests that Doris used to live a pleasant life where everybody knew everyone. Know that society has moved on and she doesn't know any one she feels trapped. The significance of the title "A cream cracker under the settee" has a very important role in the monologue. The cream cracker plays an important role as once she has found it is the first time she feels she has power over Zulema where in fact the social services would just laugh at Doris if she tried to gain revenge by reported it. "Under the settee suggests out of sight, out of mind this shows the position of the elderly in society, and this is how Doris is seen. As if she is unnoticed and grown old like the cracker. The cracker signifies `crackers` - not all there this relates to Doris's state of mind. A cracker also snaps easily this shows the fragility of Doris. Another point is that crackers are quite boring and bland which represents Doris's current life. Jack Mullen 10C ...read more.