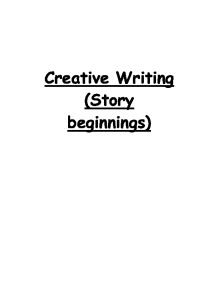 Creative Writing (Story beginnings) Chapter One (1) A golden haze encircled the angel's head and its torso glowed dazzling white against the drab dreary wall behind. "What's happe..." she willed her mouth to finish the sentence but it wouldn't obey so she gave up. She fought too against the uplifting force taking her away from the slightly damp pavement but as every ounce of resistance drained out of her limbs, she went limp and was completely at its mercy. The final thought that crossed her mind before it succumbed to the black cloud that eventually engulfed her was that she recognised this angel. * Elizabeth Anne Johnson - Lizzie to her friends - was a beautiful girl. With endless jet-black locks flowing down her back and striking features, she looked straight off a catwalk. Tonight she was wearing her favourite pale pink mini-dress with manicured nails and dainty heels to match; and with her perfect figure, she was more than able to carry it off. A combination of her stunning looks and the confidence she exuded made every head turn when she walked past - a fact of which she was well aware. Lizzie had spent all night in Brighton's new trendiest nightspot "Heaven". The place was heaving with bodies bouncing to the thundering beats pounding out of the state of the art stereo system. They were puppets dancing to the tune of the headphone-wearing master in the glass booth above. Fluffy white clouds were suspended from the ceiling, in keeping with the paradisiacal theme, and the strobe lighting completed the effect. ...read more.

She then marched over to the window, with unnatural liveliness considering the time and spread the curtains wide. "Oh Mum, it's too bright," I mumbled in complaint, raising an arm to shield my bleary eyes from the light. She ignored me. "I sometimes think you wouldn't know an early morning if it came up and bit you on the behind. Now get up, I'm sure you've plenty of work to do today and we don't want you falling behind now do we?" she chirped, practically, it seemed, in unison with the birds outside. "I need sleep," I whined, yearning for some pity. It didn't come. "You shouldn't let sleep get in the way of things. Heaven knows I don't; I can't. What would happen if I did? Nothing would get done around here - that's what!" she tutted and continued with renewed vigour, "Goodness, look at the state of this room! I'm sure you've forgotten what colour the carpet is! This is not a positive working environment. How on earth can you get anything done in here?" She asked and without pausing for an answer, delved into the abyss that was my bedroom floor. She began sorting tidying and organising like an unstoppable whirlwind of efficiency, her neat blonde bob bouncing up and down. I merely lounged on the bed and watched on in amazement. Within minutes she had transformed the cluttered chaotic mess into a tidy, orderly bedroom. When she finished, she stood up, brushed some imaginary specks of dirt from her skirt and staring at my sprawled out figure, flashed me the look. ...read more.

I used alliteration in several places for effect. "...drab dreary wall" emphasises how dull and grey the wall in contrast "dazzling white" of the angel, to to make it stand out more. In "bodies all bouncing to the thundering beat", the 'b' sound is repeated to try and mirror the beat of the music. I used the phrases "bottomless pools of baby blue" and "passive, peaceful presence" because they are quite soft sounds and I wanted to make the stranger seem calm and therefore contrast with the setting, which is "electric". I used a metaphor "They were puppets dancing to the tune of the headphone-wearing master in the glass booth above" because it emphasises the submissive nature of the clubbers and the idea of a person wielding power over someone else. The issue of power is explored in many different parts of the story. I also used repetition. The word seemed is used at the end the last paragraph. "She may have seemed like the happy-go-lucky type but appearances can be deceptive and she was quite the opposite" and "he seemed harmless enough". This is to suggest that just because the stranger seems harmless he "may be quite the opposite" and to foreshadow him doing something harmful in the future. I put it in italics both times to add emphasis and draw the reader's attention to it. In conclusion, I think the techniques I used were effective because there are unanswered questions right at the beginning, which are never answered and this appeals the curiosity of the reader, making them want to read on. ...read more.