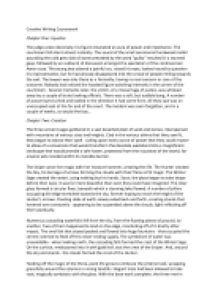 Creative Writing. The judge arose decisively; his figure emanated an aura of power and importance

﻿Creative Writing Coursework Chapter One: Injustice The judge arose decisively; his figure emanated an aura of power and importance. The courtroom fell silent almost instantly. The sound of the small ceremonial hardwood mallet pounding the cold grey slab of stone preceded by the word ?guilty? resulted in a stunned gasp, followed by an outburst of discussion amongst the spectators of the controversial Aeron case. The young boy uttered a painful cry, raised his eyes, looked round to question his representative, but he had already disappeared into the crowd of people milling towards the exit. The lawyer was only there as a formality, having no real concern or care of the outcome. Nobody had noticed the hooded figure watching intensely in the corner of the courtroom. Several moments later, the victim, of a miscarriage of justice, was whisked away by a couple of brute looking officials. There was a soft, but audible bang. A number of passer byes turned and looked in the direction it had come from. All they saw was an unoccupied seat at the far end of the court. The incident was soon forgotten, and in a couple of weeks, so would the boy? Chapter Two: Creation The three ancient sages gathered in a vast deserted plain of sand and stones, interspersed with mountains of various sizes and heights. Clad in the various attires that they saw fit, they began to weave their spell - calling upon every ounce of power that they could ...read more.

Behind them, the Hunter's clouds could be seen, idly spinning in similar gyrations. It seemed to be a perpetual bliss, the three locking the season in - save for the occasional snow from the Winter Sage. The trees that were permitted to live there often let flower petals float around the sky as well. They were of some mysterious unknown species, a variation of red colours that came from a silver barked tree. They hung, much like willows, a necessary addition by the Sage, mimicking the cascading falls. Around the glass circle, a ring of bright grass was neatly cut. It behaved as the magic let it - perfectly even height and always in perfect condition. The sky itself obeyed the magic, having no options but otherwise, it maintained its brilliant blue hue at all times, only the clouds obscured the clear canvas - along with the dancing falls and whirling pieces of earth. Now, it was time for the last addition - combining their powers, they shaped various crystalline structures. The arches were held up by 4 statures, repeated 3 times in triangular placements. One was of the Sniper, her massive hammer looking as if it could hold up, or destroy the world. Along with her, the massive blade of the Tyrant seemed to be unmovable implanted in the earth. The Hunter's bow seemed to be poised to strike the heavens once again, while the Sage's hands appeared to suspend magic between him and the arch, keeping everything in perfect balance. ...read more.

The room beyond was small, barely large enough to accommodate a single person; it was plain, with no decoration and no furnishings. It was if the door was the main attraction to the space, and only served to draw one into its dreary midst. The door itself was larger than the length of the room. The room effused a putrid smell of urine and ordure, at the centre hung Aeron, his arms and legs chained to opposite ends of the walls. His breathing was laboured, his chest heaving in rapid motion. His bramble of light hair was dark, muted; toned down by the perspiration from the experience of his punishment. Blood dripped from his barely recognisable, disfigured face. He seemed to have lost an impossible amount of weight since the Sage last saw him at the trial. The Sage attempted to awaken him, gently tapping his face. He moaned and started wailing. The Sage quickly covered his mouth with his hand and began unhooking the chains. ?It?s over Aeron? he murmured gently. Chapter four: Peace The three ancient savants had saved their people from years of prosecution and suffering. It had gone on too long, hunted down like animals, only because they were different to the rest. Of course they kept their ancient culture hidden from the prying eyes of jealous humans; however somehow, someone must have uncovered their secret. Now, and for the rest of eternity, they were free to live in peace at last. ...read more.