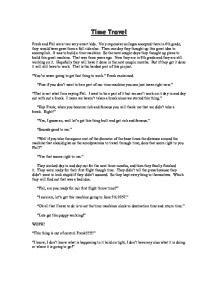 Time Travel Frank and Phil were two very smart kids. Very expensive colleges accepted them in 6th grade, they would have gave them a full ride also. Then one day they thought up this great idea to accomplish. It was to build a time machine. So the next couple days they thought up plans to build this great machine. That was three years ago. Now they are in 9th grade and they are still working on it. Hopefully they will have it done in the next couple months. But if they get it done it will still have to work. That is the hardest part of this project. "You're never going to get that thing to work." Frank exclaimed. "Fine if you don't want to be a part of our time machine you can just leave right now." "That is not what I am saying Phil. I want to be a part of it but we can't work on it day in and day out with out a break. ...read more.

Expectly they found out that it was the year 2057 and that the society must have ended from 1999 to 2057. "This is crazy Phil, let's get out of here!" "No, we have to explore and get samples so everyone at home will believe that we were here and they so they don't think we are lying." "Ok fine but let's not stay here for a long time, it is pretty scary and gloomy." "Quit being a baby Frank, tough it up, you don't see me complaining." "I know let's just go get those samples." "Sure thing!" As they go wandering out into the newly discovered land. They find a lot of things like a lot of forest, a lot more than what we have back home, cleaner environment, and the most important thing was that there was no sign of animal life. As they gather their samples they find out that they got lost and they can't figure out were they parked their time machine. ...read more.

"That is the most beautiful thing that I have seen in months!" said Frank "Me too!" As they got in the time machine they put in the destination time and were just ready to start it up when Phil struck a great idea. It was to take their little friend back to their time, since he has helped him so much. As they asked him he nodded yes again and he hopped into the time machine, then they were off. "I guess we have enough proof right here beside me for the press, huh?" "Defiantly, he is just the thing we needed." As they ended up right were they left months ago, they parents were waiting there for them. As they jumped out of the machine they got hugs and kisses from them. Then it took just 25 minutes before the press arrived. They thought it was great because they finally are going to become rich and famous, and they owed it all to the little, but big person in their mind, friend, which is going to stay with them for the rest of their lives ...read more.