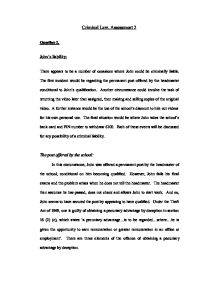 Criminal Law, Assessment 2 Question 2. John's liability: There appears to be a number of occasions where John could be criminally liable. The first incident would be regarding the permanent post offered by the headmaster conditional to John's qualification. Another circumstance could involve the task of returning the video later than assigned, then making and selling copies of the original video. A further instance would be the use of the school's discount to hire out videos for his own personal use. The final situation would be where John takes the school's bank card and PIN number to withdraw �100. Each of these events will be discussed for any possibility of a criminal liability. The post offered by the school: In this circumstance, John was offered a permanent post by the headmaster of the school, conditional on him becoming qualified. However, John fails his final exams and the problem arises when he does not tell the headmaster. The headmaster then assumes he has passed, does not check and allows John to start work. And so, John seems to have secured the post by appearing to have qualified. Under the Theft Act of 1968, one is guilty of obtaining a pecuniary advantage by deception in section 16 (2) (c), which states 'a pecuniary advantage...is to be regarded...where...he is given the opportunity to earn remuneration or greater remuneration in an office or employment'. There are three elements of the offence of obtaining a pecuniary advantage by deception. The first is whether there is a deception. ...read more.

The first possible liability could be when John returns the video. The rental agreement is for the video to be borrowed until Monday, however, the agreement between John and the school may be for him to return them on the Saturday. So, there could be a civil liability for breach of contract if it was a term of John's contract, but no criminal liability. The other possible liability would arise when John makes copies of the video and sells them. There would possible be a charge of theft. The definition of theft is the dishonest appropriation of property belonging to another with the intention to permanently deprive. Firstly, one must establish the actus reus elements, which are property, belonging to another and appropriation. The property would be the actual film, not the video itself, since that was returned within the rental agreement. The film would have belonged to the films company and by copying the film and selling them, John has assumed the rights as the owners, and so has appropriated the film (as defined in Gomez and Hinks5). As to the mens rea, John must have been dishonest and intended to permanently deprive. Section 2 (1) of the 1968 Theft Act dictates that a person who appropriates a property belonging to another will not be dishonest if he falls within the three categories: that the defendant believes he has a claim in right, or that the owner would consent if known about the circumstances or that the property's owner cannot be discovered by taking reasonable steps. ...read more.

Concerning the PIN number, the property would be classified as confidential information, and under Oxford v. Moss, this cannot constitute as theft as there is no property element. The second liability case would be the withdrawal of �100. This would clearly be theft. The property being the money, the belonging to another is really the bank and John has appropriated the money. John's actions were dishonest and not justified by section 2 (1) of the 1968 Theft Act. However, the element of intention to permanently deprive is again troublesome; John was hoping to find a means to repay it. In the case of Marshall8, where unexpired London Underground tickets were resold by ticket touts, the court ruled that there was an intention to permanently deprive, because the touts had the intention to treat the tickets as their own, regardless of the London Underground's rights. Marshall could be distinguished in this case, because whilst it could be argued by John that there was no IPD, as the money would eventually be returned to the bank, the decision would be the same as Marshall, since John disregarded the bank's rights for his own and treated the money as his own by spending it. Therefore, it could be strongly argued that there was a case of theft. In summary, it seems that John would be liable for obtaining a pecuniary advantage by deception (the job), obtaining services by deception (the discount), possible theft of the card depending on whether it was replaced, and also the theft of the �100. ...read more.