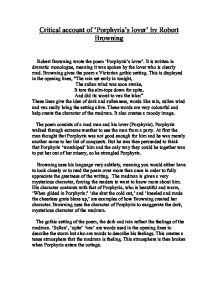 Critical account of 'Porphyria's lover' by Robert Browning Robert Browning wrote the poem 'Porphyria's lover'. It is written in dramatic monologue, meaning it was spoken by the lover who is clearly mad. Browning gives the poem a Victorian gothic setting. This is displayed in the opening lines, "The rain set early in tonight, The sullen wind was soon awake, It tore the elm-tops down for spite, And did its worst to vex the lake:" These lines give the idea of dark and sullenness, words like rain, sullen wind and vex really bring the setting alive. These words are very colourful and help create the character of the madman. It also creates a moody image. The poem consists of a mad man and his lover (Porphyria). Porphyria walked through extreme weather to see the man from a party. At first the man thought that Porphyria was not good enough for him and he was merely another name to her list of conquests. But he was then persuaded to think that Porphyria 'worshiped' him and the only way they could be together was to put her out of her misery, so he strangled Porphyria. ...read more.

In those times this behaviour would have been thought of to be quite romantic. He then builds her up and portrays her actions as if she was seducing him. This leads him to think that she is 'too weak' for him, as he says 'too weak, for all her hearts endeavour'. But when the madman finds that Porphyria had walked from a party defying her friends and family to be with him, he concludes by saying that 'Porphyria worshipp'd' him. To the madman this was a great surprise and 'made his heart swell'. This made him feel good, the fact that she worshiped him made his insecurity lead to s******c domination. He then realise this would not last... "While I debated what to do". At that moment, "she was mine, mine fair", Browning's use of repetition re-enforces his feelings of dominance and his fear of losing this. This realisation created a psychopathic thought, which turned in to reality. "I found a thing to do, and all her hair In one long yellow string I wound Three times her little throat around, And strangled her." ...read more.

Browning powerfully expresses the insane madman's belief that he has done no wrong by using religious backing, "And yet God has not said a word." In summing up my overview of the poem I will first of all discuss the flow of images, which Browning creates. He firstly describes a dark, depressing setting, which changes as Porphyria arrives moving on to become more optimistic, lifting the atmosphere and building in the direction of the climax of the murder. Then the climax begins to unwind to an almost peaceful setting. The images contrast throughout the poem leading the reader on a journey of emotions. This helps to illustrate the themes of good and evil. The poem is given a poetic quality by the use of alternate lines of rhyme. This continues rhythmically enabling Browning to create a pattern helping to emphasise a sense of finality at the end of the poem. Further highlighting the issue raised. In conclusion Browning is asking dark questions, which remain unanswerable and beyond our understanding. These questions include, motives for murder, how someone can confuse reality with insanity, he also tries address complex ultimate issues of death and immortality, which must remain out of reach. ...read more.