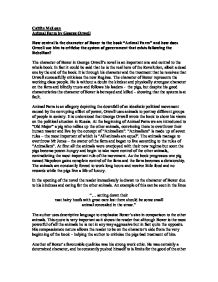 Caitlin McLean Animal Farm by George Orwell How central is the character of Boxer to the book "Animal Farm" and how does Orwell use him to criticise the system of government that exists following the Rebellion? The character of Boxer in George Orwell's novel is an important one and central to the whole book. In fact it could be said that he is the real hero of the Revolution, albeit a dead one by the end of the book. It is through his character and the treatment that he receives that Orwell successfully criticises the new Regime. The character of Boxer represents the working class people. He is without a doubt the kindest and physically strongest character on the farm and blindly trusts and follows his leaders - the pigs, but despite his good characteristics the character of Boxer is betrayed and killed - showing that the system is at fault. Animal Farm is an allegory depicting the downfall of an idealistic political movement caused by the corrupting effect of power, Orwell uses animals to portray different groups of people in society. It is understood that George Orwell wrote the book to show his views on the political situation in Russia. At the beginning of Animal Farm we are introduced to "Old Major" a pig who rallies up the other animals, convincing them to overthrow their human master and live by the concept of "Animalism". ...read more.

This kind of determination definitely sped up the process of building the animal's creation proving he was indispensable to the farm. In this quote we can also see that Boxer inspired the other animals to work harder as we can see in the line "filled everyone with admiration" . This infectious attitude Boxer possessed was another reason his presence on the farm was an important one. As well as Boxer's good qualities he had numerous qualities which were certainly unfavourable and made him very susceptible to being exploited by the pigs - who took every opportunity they could to do so. There are three qualities which are definitely detrimental to his character which are his stupidity, his ability to blindly trust his leaders, and his gullibility. An example of these traits being displayed can be seen in the lines ... "Their two most faithful disciples were the two cart-horses, Boxer and Clover. Those two had great difficulty in thinking anything out for themselves, but having once accepted the pigs as their teachers, they absorbed everything that they were told, and passed it on to the other animals by simple arguments." Here Orwell tells the reader that Boxer was lacking the intelligence to think and reason logically so had no choice but to do exactly what was instructed of them. ...read more.

Firstly dogs are sent to attack him but his strength saves him and he manages to escape. After this first attack Napoleon decides to send Boxer to the glue factory where he would be killed. He lies to the other animals and tells them he is being sent to hospital. This final act of betrayal by Napoleon displays the pigs need for power has reached obsession. They simply dispose of their faithful follower and dedicated worker due to their unproven idea he was plotting a revolution and because his deteriorating health made him less useful. The contrast between the character of the pigs and Boxer is undeniable. Boxer spends the vast majority of his time working where as the pigs take part in no physical labour. Also, Boxer is portrayed as very slow and dim-witted while the pigs are very cunning. Another obvious contrast is the animal's personalities - Boxer's kind hearted nature and the pigs immoral, selfish behaviour. This comparison helps to emphasise Boxer's good qualities throughout the novel. In conclusion I feel that the character of Boxer is definitely pivotal to conveying the message of the novel. The demise of the admirable character of Boxer is definitely the definitive point of the novel - showing the completely downfall of their ideal movement and symbolising the downfall of ordinary workers in a dictatorship. Orwell uses the novel to convey his message on the failings of dictatorship very successfully. ...read more.