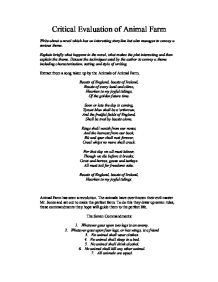 Critical Evaluation of Animal Farm - Write about a novel which has an interesting storyline but also manages to convey a serious theme.

Critical Evaluation of Animal Farm Write about a novel which has an interesting storyline but also manages to convey a serious theme. Explain briefly what happens in the novel, what makes the plot interesting and then explain the theme. Discuss the techniques used by the author to convey a theme including characterisation, setting and style of writing. Extract from a song taken up by the Animals of Animal Farm. Beasts of England, beasts of Ireland, Beasts of every land and clime, Hearken to my joyful tidings, Of the golden future time. Soon or late the day is coming, Tyrant Man shall be o'erthrown, And the fruitful fields of England, Shall be trod by beasts alone. Rings shall vanish from our noses, And the harness from our back, Bit and spur shall rust forever, Cruel whips no more shall crack. For that day we all must labour, Though we die before it breaks; Cows and horses, geese and turkeys. All must toil for freedoms sake. Beasts of England, beasts of Ireland, Hearken to my joyful tidings. Animal Farm has seen a revolution. The animals have overthrown their evil master Mr. Jones and set out to make the perfect farm. To do this they draw up seven rules, these commandments they hope will guide them to the perfect life. ...read more.

Slowly but surely Napoleon continues to extend his power. It is the dogs that show the first signs of Napoleons dominance. They chase away Snowball just as he is unveiling his new special project, which would cut down the animal's working week to two days. The dogs also attack anyone doing or saying anything against Napoleons wishes. Napoleon continued to expand his leadership on Animal Farm by 're-writing' history to make Snowball out to be a villain dedicated to brining Mr Jones back to Animal Farm. He accuses a number of animals of helping Snowball and executes them on the spot; this breaks two of the most basic commandments 2.Whatever goes upon four legs, or has wings, is a friend. 6.No animal shall kill any other animal. The animals executed, are also the animals that pose any threat to Napoleon's dominance. None of the other animals realise this is a concealed attempt by Napoleon to wipe out any resistance on the farm. The reader does however, and this is what makes the story interesting, seeing how subtly the pigs manage to dominate the farm. The novel is serious however, and although it is presented as a fable, like many fables, a serious point lies behind it. The sheep are also brainwashed. Sheep, being particularly stupid, take no time at all to be brainwashed and whenever someone raises a valid point against Napoleon they bleat out at the top ...read more.

Another example of the pig's cleverness is how Squealer makes use of a very basic but very effective technique often used when making speeches. The technique relies on the fact that our mind conjures up images of what we are being told. For example take the phrase, "The cow jumped over the moon" The mind automatically gives us a picture of a cow jumping over a moon. Squealer uses this technique a number of times during his many addresses to the so-called 'lesser animals'. "...Necessary to make a readjustment of rations" Squealer tells the animals they will now receive even less food than they have now, even though they are on the brink of starvation. However, the news is softened to the animals because from the statement above, their minds conjure up a picture of them getting a different amount of food, not a smaller amount. The pigs use their cunning and slyness to take advantage of 'Animal Farm' and its less intelligent inhabitants. Unlike most fables, Animal Farm has no happy ending. By the end of the last chapter Animal Farm is dominated by one species. This species does little or no work but takes food from the hard work of others. It is not until it is too late that the animals realise that the situation they are in is remarkably similar to the one they were in before the revolution. A full circle has taken place, one species dominates, there is unrest until it is overthrown, another species dominates, there is unrest... ...read more.