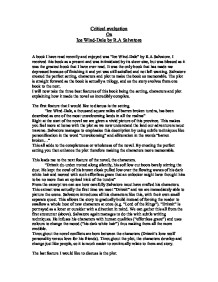 Critical evaluation On Ice Wind-Dale by R.A Salvatore A book I have read recently and enjoyed was "Ice Wind-Dale" by R.A Salvatore. I received this book as a present and was intimidated by its sheer size, but was blessed as it was the greatest book that I have ever read. It was the only book that has made me depressed because of finishing it and yet was still satisfied and not left wanting. Salvatore created the perfect setting, characters and plot to make the book so memorable. The plot is straight forward as the book is actually a trilogy, and so the story evolves from one book to the next. I will now take the three best features of this book being the setting, characters and plot explaining how it made the novel so incredibly complete. The first feature that I would like to discuss is the setting. ...read more.

This extract was actually the first time we meet "Drizzit" and we are immediately able to picture the scene. Salvatore introduces all his characters like this, with their own small separate quest. This allows the story to gradually build instead of forcing the reader to swallow a whole host of new characters at once (e.g. "Lord of the Rings"). "Drizzit" is portrayed as a loner or outsider with a direction in mind. We can gather this all from the first encounter (above). Salvatore again manages to do this with subtle writing techniques. He infuses his characters with human qualities ("effortless grace") and uses colours to change the mood ("his dark white hair") thus making them all the more credible. Throughout the novel conflicts are born between the characters (Drizzit's lone wolf personality versus love for his friends). Throughout the plot, the characters develop and change just like people, so it is much easier to continually relate to them and story. ...read more.

The humans and dwarves looked upon the mass of invaders with fiery eyes, watching as the battle was about was about to commence..." I remember it being about four o'clock in the morning when I read that excerpt. I simply could not put it down. It filled me with such suspense that by putting the book down at that point would have felt sinful. I had to read on. It is points like that in this novel that makes it so incredibly complete and satisfying. In conclusion R.A Salvatore created an extremely well crafted novel concentrating only on the features relevant to the story, these being the setting, characters and plot (unlike "Lord of the Rings" which is full of sub-plots and hidden themes). By focusing in on these features he makes the novel so satisfying that you are left sad to have finished it. "Ice Wind-Dale" is a work of art, in all one thousand and four pages of glory and I would recommend it to anyone. ...read more.