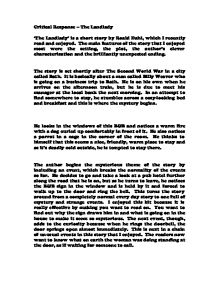 Critical Response - The Landlady 'The Landlady' is a short story by Roald Dahl, which I recently read and enjoyed. The main features of the story that I enjoyed most were the setting, the plot, the author's clever characterisation and the brilliantly unexpected ending. The story is set shortly after The Second World War in a city called Bath. It is basically about a man called Billy Weaver who is going on a business trip to Bath. He is on his own when he arrives on the afternoon train, but he is due to meet his manager at the local bank the next morning. In an attempt to find somewhere to stay, he stumbles across a cosy-looking bed and breakfast and this is where the mystery begins. He looks in the windows of this B&B and notices a warm fire with a dog curled up comfortably in front of it. He also notices a parrot in a cage in the corner of the room. He thinks to himself that this seems a nice, friendly, warm place to stay and as it's deadly cold outside, he is tempted to stay there. The author begins the mysterious theme of the story by including an event, which breaks the normality of the events so far. He decides to go and take a look at a pub hotel further along the road that he is on, but ...read more.

These are all trivial and get us into the trivial pattern of the story. He then does a clever thing. He breaks the normality of the previous events by suddenly throwing in an event that contains mystery. The first thing is the bed and breakfast sign that holds him in place and draws him into the house. It gets us wondering what is going to happen and is effective in making the reader want to read on. He continues to add to the list of mysterious events until the reader is hooked on the story and wants to keep reading till the end to find out what happens. The second thing that made the story more enjoyable was the choice of characters. There were two main characters in the story. Billy Weaver first of all was the, if you like, goody in the story. He was a young businessman of the age of seventeen who went about his work in a swift but organised way and who seemed careful with his money. He was very clever in the way he judged a situation. For example, when he first enters the B&B, he begins to think the old lady is off her head, but instead of chickening out and leaving he decides that at such a cheap price, it was worth it. ...read more.

He also seems to recognise both of the names and when he asks the lady about them, she says that it is ludicrous that they are well known for anything. He finally concludes that the men from the guest book had, in fact, gone missing and he'd read about them in the newspapers. When the woman offers him some tea and he notices an odd taste from it we begin to think that the woman is going to kill Billy and perhaps stuff him like the animals and maybe even the other two men. She indicated that this might be so, earlier in the story when she says that the two men are still on the third floor, which makes us think that, if they were in the hotel over two years ago, that the woman may have done something to them to make them stay there. She also makes a suspicious remark when she says: 'Mr Mulholland was also seventeen'. This, along with various other remarks, which using the past tense to describe Mr Mulholland, suggests that he is dead because if he as alive, she would have said 'Mr Mulholland is also seventeen'. Overall this was a great, enjoyable, short story and I have hopefully explained the reasons why above. The features that I mentioned above, along with the ending, made it an intriguing story to read and one which will remain in my memory for a great many sleepless nights. Damien Hendry ...read more.