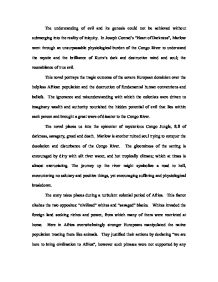 The understanding of evil and its genesis could not be achieved without submerging into the reality of iniquity. In Joseph Conrad's "Heart of Darkness", Marlow went through an unsurpassable physiological burden of the Congo River to understand the mystic and the brilliance of Kurtz's dark and destructive mind and soul; the resemblance of true evil. This novel portrays the tragic outcome of the severe European dominion over the helpless African population and the destruction of fundamental human conventions and beliefs. The ignorance and misunderstanding with which the colonists were driven to imaginary wealth and authority nourished the hidden potential of evil that lies within each person and brought a great wave of disaster to the Congo River. The novel places us into the epicenter of mysterious Congo Jungle, full of darkness, savagery, greed and death. Marlow is another ruined soul trying to conquer the desolation and disturbance of the Congo River. The gloominess of the setting is encouraged by dirty with silt river water, and hot tropically climate; which at times is almost excruciating. The journey up the river might symbolize a road to hell, encountering no salutary and positive things, yet encouraging suffering and physiological breakdown. ...read more.

Once being a man with a common faith to explore, conquer, and rule, Kurtz leaped a gigantic step further and acquired an almost a god-like figure among the local community. He was the biggest trader of ivory, and produced more than all other posts on the river combined. He was a superior leader with almost magical persuasive abilities and strongly appealed to the public no matter how cruel and unjust his actions were. The complete power over the people and the insane nature of Kurtz's character made him a devil that killed destroyed and knew no mercy and with lack of discernment. Besides the harsh environment of the Congo River, the abrupt murders, unprecedented acts of violence, constant paranoia and fear, the most troubling and devastating conflict that Marlow had to face was to understand Kurtz's mind. He needed to understand his motives, desires, justifications, and possible resolutions of his malignant ambitions. As a whole, the theme of the book revolves around Marlow seeking to understand Kurtz and his mentality, to realize what brought him to what he is. ...read more.

Finally, he admired the fact how this young man was able to overcome all the external and internal challenges of this journey, and thus let Marlow to take him. Kurtz dies on the journey back down the river. His tortured soul and body could not cope with another such devastating challenge. He died screaming, "Horror, horror!" These words represented the complete desolation of his mind and the solid agreement of all the evils he ejaculated. When Kurtz was living Marlow referred to him as shadow� since he was a metaphysical shadow hanging over his mind making all his thoughts consciously be about Kurtz. However, now when he truly understood what Kurtz was, he called him the Shadow, the true embodiment of evil. As Marlow's journey in Africa terminated the results of the journey would stay in his mind forever, in the mind that went through a dramatic transformation and now was filled with completely different load of understanding the ills and evils of humanity. This new perspective on society's ignorance did not give peace Marlow's mind. He had to live suffering, yet tolerating the fact that there is Kurtz in each one of us and that the soul destructive forces of the Congo River might ignite in anyone triggering another tsunami of evil. ...read more.