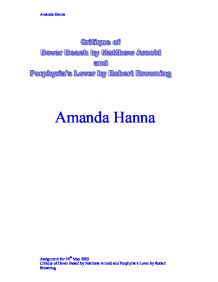 Amanda Hanna Use TWO poems from the poetry selection you have studied (by TWO different poets), and write a detailed critique of each. In your analyse you should consider all of the following: - subject, form, tone, imagery, rhythm, thyme, intention and show an awareness of the importance of the degree of integration and harmony in all these elements. My first choice of poem is the dramatic monologue "Dover Beach" by Matthew Arnold. Images of sight and sound dominate the poem from it very first line. The sea is calm to night. The tide is... ... ... Gleams and is... ... The repetition of 'is' illustrates the seaside at night; you can almost smell the scene. The poem starts of calm and peaceful, then the mood changes to melancholy. The speaker can't come to terms with the reality that is before him. Listen! You hear the grating roar... ... You can hear the changes in the rhythm of the poem. The imagery and punctuation in lines 11 - 14 implicite the waves and human experience felt by the speaker. ...read more.

He has been left in the darkness and uncertainty of humanity. Hath really neither joy, nor love, nor light He is pessimistic, he sees no method to change the way he is feeling, and ignorance was bliss. Swept with confused alarms... ... ... Where ignorant armies clash by night. He is sensitive to what is happening in the world, when talking about armies of people believing in one thing or another, there is certainly a clashing of philosophies. There is a confused alarm in his thoughts about Christianity and the writing of Darwin, and this is portrayed beautifully in this poem. My second poem is Porphyria's Lover by Robert Browning, which is one of the earliest, and most shocking of Browning's dramatic monologues. This poem is in one long stanza, with a remarkable even tone throughout, which is told through the speaker, a psychotic killer (not the poet) recalling an appalling incident that has already happened. Just as the nameless speaker seeks to stop time by killing Porphyria, this poem seeks to freeze our consciousness with reality. ...read more.

He wraps her yellow hair around her neck and strangles her. He then toys with her corpse, opening her eyes and propping her body up against his side. I propped her head up as before Only, this time my shoulder bore Her head, which droops upon it still: .........So glad it has its utmost will... There is a shift in tense, and the speaker changes her head to it. He has gained this beautiful object. The visual imagery used is chilling, the denouement in the closing lines is shockingly apparent, and he savours her dead body resting against his. Nothing has been gained by her death, but in his crazed mind, he has increased his power. And thus we sit together now......... .........God has not said a word! He sits with her body this way the entire night and in his final reference, he remarks that even God approves of what he as done. He has logically justified his actions and will not take responsibility. This is indeed, an explicitly haunting adaptation of a psychotic killer. Amanda Hanna Assignment for 24th May 2003 Critique of Dover Beach by Matthew Arnold and Porphyria's Lover by Robert Browning ...read more.