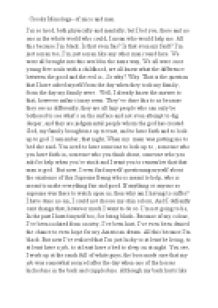 Crooks monologue- Of mice and men

﻿Crooks Monoluge- of mice and men. I?m so tired, both physically and mentally, but I bet you, there aint no one in the whole world who could, I mean who would help me. All this because I?m black. Is that even fair? Is that even my fault? I?m just a man too, I?m just a man like any other man round here. We were all brought into this world in the same way, We all were once young free souls with a childhood, we all know what the difference between the good and the evil is., So why? Why. That is the question that I have asked myself from the day when they took my family, from the day my family were.. Well, I already know the answer to that, however unfair it may seem. They?ve done this to us because they see us differently, they are all lazy people who can only be bothered to see what?s on the surface and not even attempt to dig deeper, and they are judgemental people whom the god has created. ...read more.

Although my back hurts like a b***h every second in every minute in every hour in every day I?m grateful for it. Without it, who knows where I would be now? Probably dead or left for the dead out in the streets. And let me tell you , the thought of that is way better than living in the ranch and being ignored by those white ranch workers.Well, I?m not always ignored, I mean last Christmas I actually was invited in to celebrate with them, they even gave me some whiskey,It was by far an amazing night for me, but then again anything?s better than spending Christmas alone in the dark with the horses. And one of the new guys even came into my room and actually gave me company for the first time in many many years. That guy?s name is Lennie small, There?s no dening that he?s a heck of a strong worker, a giant guy, but there?s also no dening that he?s one stupid b*****d. ...read more.

He told me that he would soon bust outa this place to get his own place with George and Lennie, so I told him straight up, that I?d seen to many guys with dreams similar to them and that I know that it would always only just stay a far away dream, nothing more. This was until they told me that they had the money for it. I was going to tell them about my dream and even ask them to let me stay with them, but that evil b***h came to my door at that exact moment, She heard a bit of talking from me about my dream. That b***h was curley?s wife, Curley?s the bosses son so its not like I could have talked back to her while she told me that I could never ever get my dream. She crushed me slowly with her words, but I was thankful for the wakeup call. If she hadn?t said thatI would have just built up false expectation for myself, that would soon be crushed. That?s just my life, Ablack guy with no chance in the white society. ...read more.