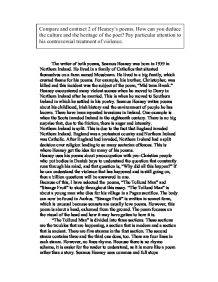 culture and the heritage in heaney

The writer of both poems, Seamus Heaney was born in 1939 in Northern Ireland. He lived in a family of Catholics that situated themselves on a farm named Mossbawn. He lived in a big family, which created theme for his poems. For example, his brother, Christopher, was killed and this incident was the subject of the poem, "Mid term Break." Heaney encountered many violent scenes when he moved to Derry in Northern Ireland after he married. This is when he moved to Southern Ireland in which he settled in his poetry. Seamus Heaney writes poems about his childhood, Irish history and the environment of people he has known. There have been repeated invasions in Ireland. One example is when the Scots invaded Ireland in the eighteenth century. There is no big surprise that, due to the friction, there is anger and intensity. Northern Ireland is split. This is due to the fact that England invaded Northern Ireland. England was a protestant country and Northern Ireland was Catholic. After England had invaded, Northern Ireland had a split decision over religion leading to so many sectarian offences. This is where Heaney got the idea for many of his poems. Heaney uses his poems about preoccupation with pre-Christian people who put bodies in Danish boys to understand the question that constantly runs through his mind, and that question is, "Why did all this happen?" If he can understand the violence that has happened and is still going on, then a billion questions will be answered in one. ...read more.

Figurative language is used in nearly everything we read or write. In poem A, many metaphors are used throughout. A few examples of this are: "She tightened her torn on him And opened her fen, Those dark juices working Him to a saint's kept body," This whole stanza in "The Tollund Man" is a sexual metaphor, a sexual connotation. It also suggests that he died for religious meanings. A few other metaphors are: "Tell-tale skin and teeth" And "old man-killing parishes." Another technique used is an oxymoron. E.g. "Sad freedom" This could also be called antithesis. Antithesis is a contrast of ideas or words that are balanced against each other. The use of the oxymoron shows the negative side of the poem. The fact is this body was killed brutally and that fact can be often hidden but with the use of figurative language the truth can be unleashed again. The imagery conveys the real meaning of the poem. That is not to discuss the body but to find the real reason why there is trouble with the IRA in Ireland. Some negative imagery in "The Tollund Man" is: "The scattered, ambushed flesh of labourers" And "Tell-tale skin and teeth." This is negative imagery because it isn't pleasant to only know the bodies through these things. The poet addresses the poem in 1st person in "The Tollund Man." The use of 1st person makes it very direct and personal. "I will feel lost" This creates a feeling on the part of the reader of sharing the particular experience being described, empathy. ...read more.

He wants the reader to know how brutally people were killed. He also wants us to understand about bog bodies and the history behind them. A lot of the bog bodies he writes about are Christian, which, of course, is his religion. Which brings me on to say why he is so interested in Bog Bodies. The reason is that Seamus Heaney is trying to find out why violence is so common, and why people find it necessary. The main similarities between "The Tollund Man" and "Strange Fruit" are that they're both containing violence due to their religion. However, "The Tollund Man" has a much nicer death in comparison to "Strange Fruit." This is why they are different. Heaney is very pre-occupied with violence and nearly all of his poems have violence in them. This could be because he was brought up with violence happening continuously around him. He's also very faithful to God but he had the question of 'Why does God let this happen?' through his mind. Both poems have contributed a lot to my understanding of Irish culture, history and politics. I now know how brutal the killings were, how violent they were. I also learnt about sectarian offence and how religion and beliefs can cause so much trouble. Out of the poems, "Strange Fruit" and "The Tollund Man", I consider "Strange Fruit" to be the most successful. It uses simple punctuation, but makes sure it's enough to grasp the reader's attention. I like the fact that it has Diodorus Siculus mentioned. Overall, Strange Fruit is my favourite. ?? ?? ?? ?? ...read more.