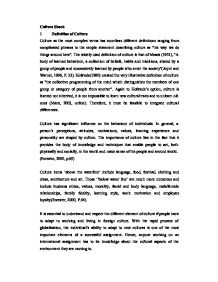 Culture Shock 1 Definition of Culture Culture as the most complex terms has countless different definitions ranging from complicated phrases to the simple statement describing culture as "the way we do things around here". The widely used definition of culture is that of Meads (1951), "A body of learned behaviour, a collection of beliefs, habits and traditions, shared by a group of people and successively learned by people who enter the society"(Joynt and Warner, 1996, P. 33). Hofstede(1980) created the very illustrative definition of culture as "the collective programming of the mind which distinguishes the members of one group or category of people from another". Again to Hofstede's option, culture is learned not inherited, it is not impossible to learn new cultural traits and to unlearn old ones (Manz, 2003, online). Therefore, it must be feasible to integrate cultural differences. Culture has significant influence on the behaviour of individuals. In general, a person's perceptions, attitudes, motivations, values, learning experience and personality are shaped by culture. The importance of culture lies in the fact that it provides the body of knowledge and techniques that enable people to act, both physically and socially, in the world and make sense of the people and around world . (Forester, 2000, p.63) Culture items 'above the waterline' include language, food, festival, clothing and dress, architecture and art. Those ''below water line' are much more numerous and include business ethics, values, morality, facial and body language, male/female relationships, family fidelity, learning style, work motivation and employee loyalty(Forester, 2000, P.64). It is essential to understand and respect the different element of culture if people have to adapt to working and living in foreign culture. With the rapid process of globalization, the individual's ability to adapt to new cultures is one of the most important elements of a successful assignment. Hence, anyone working on an international assignment has to be knowledge about the cultural aspects of the environment they are moving to. ...read more.

Of course this model only describes an ideal process of Culture Shock and adaptation. Not every individual in every situation goes through the process according to Oberg�s model. The development of real conflicts can differ significantly. On the one hand some intercultural encounters cannot make it through the crisis phase and no way of communication and recovery can be found. Instead of improving understanding and accepting differences the conflict escalates and finally leads to separation. On the other hand there are intercultural encounters that only show minor effects of crisis or even no Culture Shock at all. Another criticism to the model is that the phases do not necessarily appear in such a strict sequence. Marx found it to be more realistic to use a model "that is not strictly linear but integrates a dynamic and repetitive cycle of positive and negative phases until you break through Culture Shock." 5. How to deal with Culture Shock - Possible Solutions 5.1. The need for effective International Human Resources Management Due to international growth of companies, the building of strategic alliances and networks or cross-cultural mergers and acquisitions the number of expatriates increased significantly over the last 30 years. Becoming an expatriate is usually associated with possibilities to increase salary, career opportunities, and self-development. Nevertheless, an international assignment also goes along with a high social pressure in the family or relationship, the temporary or permanent loss of social relations, a risk for career planning, and depending on the host country considerable Culture Shock and integration problems. The limited availability of personnel willing and capable of working abroad for an extended period of time as well as the specialized requirements of the job and the need for internal recruitment oftentimes leads to the fact that there is only a small number of candidates to choose from. As a consequence, in many cases the candidate chosen is simply "the man who happened to be there". ...read more.

Nevertheless, no wonders should be expected from preparatory training. It is not possible within the framework of usually rather short training programs to reprogram adults who are socialized in one culture. Of course it is not the aim of training to change the total mindset of an individual, that would be the wrong approach. It is rather the effort to create a certain openness towards foreign and sometimes bewildering attitudes and behavior, cultural awareness and skills, and therefore intercultural competence. 3.3.2. Practical assistance - Help and support during the assignment Practical assistance contributes significantly toward the adaptation of the expatriate and his family. Being left to fend for themselves would most likely increase the negative effects of Culture Shock and thus make adjustment much more difficult and stressful for all persons involved. In order to avoid the feeling of being left alone many companies offer support in establishing a pattern of day-to-day life including friends, banks, shopping, laundry, transportation, and so on. The sooner this routine is set up the better are the prospects that the expatriates will adapt successfully. Some companies even have an own relocation service that helps expatriates with all tasks from planning the travel to organizing schools for the children. Other important aspects during the actual assignment include professional support, permanent information about developments in the parent operation, regular communication between domestic mentor and expatriate, information trips to the home operation, and training programs. All these measures help to prevent the "out of sight - out of mind" phenomenon that contributes to the problems of re-entry shock. The permanent information flow reduces the irritation about organizational changes in the parent operation and facilitates reintegration. A domestic mentor plays a crucial role when it comes to finding a new position for the former expatriate. The returnee has to deal with many difficulties and drawbacks when resettling and having an influential supporter during this time is worth a lot. ...read more.