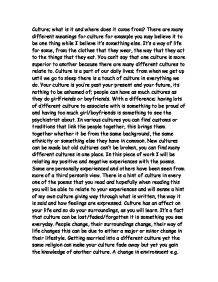 Culture; what is it and where does it come from?

Culture; what is it and where does it come from? There are many different meanings for culture for example you may believe it to be one thing while I believe it's something else. It's a way of life for some, from the clothes that they wear, the way that they act to the things that they eat. You can't say that one culture is more superior to another because there are many different cultures to relate to. Culture is a part of our daily lives; from when we get up until we go to sleep there is a touch of culture in everything we do. Your culture is you're past your present and your future, its nothing to be ashamed of; people can have as much cultures as they do girlfriends or boyfriends. With a difference; having lots of different culture to associate with is something to be proud of and having too much girl/boyfriends is something to see the psychiatrist about. In various cultures you can find customs or traditions that link the people together, this brings them together whether it be from the same background, the same ethnicity or something else they have in common. New cultures can be made but old cultures can't be broken, you can find many different cultures in one place. In this piece of work I will be relating my positive and negative experiences with the poems. Some are personally experienced and others have been seen from more of a third person's view. ...read more.

In the poem Half-Caste you can see that the poet is pissed off that he has been called half-caste, he's angry because he has been labelled. You can tell how he feels, when your just trying to have fun with mates and something happens you feel completely down someone calls you a "paki", obviously your going to feel some sort of hate towards that person. The poem is like an argument between two people, conversational, where you can only read what one person is saying. The poet is being sarcastic making fun of the other person yet with a serious tone near the end. Quoting "Explain yuself" this phrase is repeated in the poem quiet a lot, when someone says something to you obviously now-a-days you would say 'what you talking to me?' or something that would make the other person know that your angry and to back off. When the poet says this it makes me think, would you ever say that to someone instead of what we say now a day? My birth was in Pakistan and my mother tongue is Urdu, it's the language in which I speak to my parents in and some other people. I find it an advantage to be multilingual because that way you can say things to people and they wont understand what your saying to them, you could be swearing for all they know. Only joking, it's an advantage because not many people are and the fact that you can cope with 'two tongues' in your mouth is something to be proud of. ...read more.

So when it comes to me being sixteen and wanting to work my parents will let me because even though they have eastern culture in them they know that I also have western meaning that I have a choice and knowing my capability they know I can do better then my brother so that's that. There are also negative sides to having two cultures especially if your parents are different, some traditions may clash, some things may not be allowed. For example; in Islamic weddings there are three different types of weddings, Bengali weddings where the men and women are separate and it's kind of dry, then there are Pakistani and Gujarati weddings which are similar but the Pakistani weddings may have a slight hint of other cultures influence. There is music, dancing, functions, and liveliness all over the place, yet you wont see it in all weddings its just a typical wedding. Now if you think about it if one parent has the Bengali culture and the other was raised with the Pakistani culture which one would you go by? It's hard to decide you don't want to upset either parent. Overall there are more advantages then disadvantages to having two cultures. In conclusion my life has been a roller coaster of influences from everywhere, at the end of it all my experiences made me the person I am today. Both good and bad one's shaped my life to what it is now and the experiences still yet to come decide how my life will take shape in the future and so do my actions. Meshaal Ihtasham 10L ...read more.