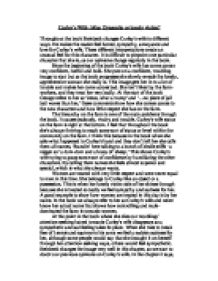 Curley's Wife: Miss Dynamite or lonely victim? Throughout the book Steinbeck changes Curley's wife in different ways. He makes the reader feel hatred, sympathy, annoyance and love for Curley's wife. These different interpretations create an unusual feel for this character. It is difficult to pinpoint one particular character that she is, as our opinions change regularly in the book. Since the beginning of the book Curley's wife has come across very confident, lustful and bold. She puts on a confident, troubling image to start but as the book progresses she slowly reveals the lonely, apprehensive woman she really is. This image gets her in to a lot of trouble and makes her come across bad. She isn't liked by the farm-workers, and they treat her very badly. ...read more.

This shows Curley's wife trying to grasp some sort of confidence by humiliating the other characters. By calling them names she feels almost superior and special, which is what she always wants. Women are treated with very little respect and were never equal to men in this time. She belongs to Curley like an object or a possession. This is when her lonely victim side of her shines through because she is treated so badly we feel sympathy and sadness for her. A good example to show how women are treated in this day is by her name. In the book we always refer to her as Curley's wife and never know her actual name that shows how controlling and male-dominated the farm is towards women. ...read more.

It quotes all the reasons we used to hate Curley's wife in the past and compare it with her now, laying peacefully on the hay. Steinbeck changes Curley's wife character a lot, which makes it hard to answer whether she is Miss Dynamite or a lonely victim. I think that Steinbeck's intentions were to make us feel sympathetic towards her but also to have a hidden hatred for her previous attention-seeking character. In conclusion, I think that this question of whether Curley's wife is Miss Dynamite or a lonely victim cannot be answered. Steinbeck changes the character too much throughout the book so that you can never pinpoint a true opinion. Only till the end do you realise a true sense of loneliness and sympathy, but while she was alive she was an annoying/ troubling character, which will always linger in our minds when we try to understand her image. Jemma Davis ...read more.

The question here asks the candidate to analyse the character of Curly's wife in Steinbeck's 'Of Mice And Men', with particular emphasis on whether we should feel contempt or sympathy for her. The candidate's Response to the Question is very ...

The question here asks the candidate to analyse the character of Curly's wife in Steinbeck's 'Of Mice And Men', with particular emphasis on whether we should feel contempt or sympathy for her. The candidate's Response to the Question is very well-attuned to the question, with a good viewpoint that doesn't simply answer the question. The assumptions aren't made in the opening paragraph and the candidate uses the essay to discover for themselves and for the examiner what they believe. Though they do not ever appear to come to a conclusion, alluding to the fact that the question is unanswerable because Steinbeck "changes [Curly's wife] regularly in the book". This is somewhat counter-productive because to not clearly answer the question compromises the strength of the overall answer. It would seem though, that the candidates answer is sufficiently-supported in order to achieve at least a C grade.

The Level of Analysis here is sound. All the expected aspects of a GCSE candidate response are evident - an appreciation of the base text, understanding of the question, and accurate identification of moments that aid in answering the question (interactions with Curly's wife and other characters, Steinbeck's own descriptions of the Curly's wife), as well a an astute recognition of how she as a character herself must feel, being "right at the bottom" of the hierarchy. I would argue that she is not at the bottom though - Crooks is evidently at the bottom. The use of the word hierarchy is complex because each character has their own 'hierarchy'. Curly, for example, will put his wife near the top but, as stated by the candidate in their response, the ranch-hands might disagree and put her lower down, and maybe even place Slim at the top. So candidates as a whole should avoid making such sweeping generalisations as very few things - particularly the characters, which are symbols of human traits and emotions - in any novel are so straightforward. Humans are complex, and so are fictional characters.
Where this candidate really wins marks is in their understanding of the contextual factors that influence the other character's opinions of Curly's wife. She has no name, and is isolated on a ranch in the middle of nowhere with a group of men, and so is very bored, but as the candidate noted, women were "never equal to men in this time". This understanding shows the candidates ability to appreciate the social standards of the time and how these affect the novel's happenings and the interactions between the men and Curly's wife.
Perhaps though, greater analysis should be focused on Curly's wife's dreams, and what these say about her. Being a major theme in the novel, it is foolish for any candidate to miss it when analysing characters. Her dream of moving away and being a rich and famous movie star show us further that she is superficial and idealistic, but also that she is disparagingly bored with her existence as someone else's property - she wants to break away from the constriction of being nothing more than the nameless wife of the son of a ranch-owner during the Great Depression. This is fairly straightforward as the theme of dreams is reverberated through the entire novel and is frequently used as an exam question, so this candidate missed easy marks in not recognising this.

The Quality of Written Communication is acceptable. There are moments when a misuse of language makes the answer clunky and hard to understand. A better knowledge of how to accurately use commas would prevent this. Whilst basic, some student struggle with punctuation, but sentences like "This is when her lonely victim side of her shines through because she is treated so badly we feel sympathy and sadness for her" are often hard to understand and their intention ambiguous because of the repetition of "her". For example, the correct expression would be: "The is when THE lonely, VICTIMISED side of her shine through...". As well as this, there are moments when the candidate's grammar slip up: "makes her come across bad" should be "makes her comes across AS bad". These minor errors can be corrected by a simple spell-check and proof-reading before submission.