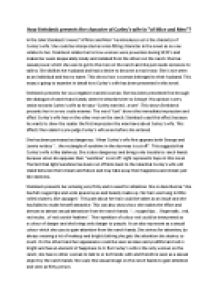 ﻿How Steinbeck presents the character of Curley?s wife in ?of Mice and Men?? In the John Steinbeck?s novel ?of Mice and Men? he introduces us to the character of Curley?s wife. She could be interpreted as a mis-fitting character in the novel as no one relates to her. Steinbeck relates her to how women were powerless during 1930?s and makes her seem desperately lonely and isolated from the others on the ranch. She has sexual power which she uses to get to the men on the ranch and she just needs someone to talk to. She dislikes her husband and had a desire to become a movie star. She is not seem as an individual and has no name. This shows how a woman belonged to their husband. This essay is going to examine in detail how Curley?s wife has been presented in this novel. Steinbeck presents her as a negative married woman. She has been presented first through the dialogue of ranch-hand Candy when he describes her to George. His opinion is very sexist towards Curley?s wife as he says ?Curley married...a tart?. This shows Steinbeck presents her in a very crude manner. The word ?tart? shows the immediate impression and effect Curley?s wife has on the other men on the ranch. Steinbeck used this effect because he wants to show the reader the first impression the man have about Curley?s wife. ...read more.

Steinbeck not naming this particular character links back to how during the Great Depression of the 1930?s women were greatly kept down and were not treated as equal to men. The lack of name also shows Curley?s wife having a very little status. Curley?s wife herself even seems to understand that her role on the ranch is very unimportant. This also shows that she herself is not bothered to the fact that she and other women like her around the country is treated as they are second class citizen. Curley?s wife has been portrayed to have a racist attitude towards Crooks. When she says ?well, you keep your place then, Nigger?. This shows even though she is younger, she has no respect and thinks herself a lot more better than Crooks because she is married to Curley. She made this comment towards Crooks for attention because she didn?t feel noticed. She uses the fact she is a defenceless woman against Crooks is very racist towards him. The word ?nigger? is considered as a very racist word and shows extreme lack of respect. But at time, the social attitudes towards black people were extremely racist and Curley?s wife chose to be racist towards Crooks as he is the most weak and least able to defend himself. Steinbeck links Curley?s wife with the American Dream upon numerous occasions. ...read more.

Steinbeck portrays Curley?s wife as a young child in her death. When she dies ?the meanness of death and the planning and the discontent and the ache for attention and were all gone from her face. She was very pretty...simple...sweet ... young?. This shows after all the stress and things life had placed on her, she has finally relaxed in her death. The word ?pretty...simple...sweet ... young? implies how young she was and how she had so much unhappiness in such a short life time. Her beauty ruined her in a way, as that was the main cause of her disappointment with action. It also makes her seem so young like a child whom Steinbeck is trying to make the reader automatically sorry for her and guilty in a way of thinking her as a negative woman. In conclusion, my opinion is that Curley?s Wife does seek attention; however this is only because she has been dispossessed of attention throughout her life. Her unwilling marriage to Curley, the fact that she could not accomplish her dream and her having a lack of friends and reverence made me feel regretful about my first impression of her. Steinbeck presents Curley?s Wife in an apathetic way which robustly influences the readers to have a negative image of her. Nevertheless, as the novel reaches its end this negative feeling received by the reader soon changes into that of commiseration. Steinbeck has created a three dimensional character for us to feel sympathetic towards. ...read more.

This is a promising essay; in particular in that it has a very competent introduction and conclusion and the aims set out in the introduction are generally carried out in the main body. The analysis covers most of the evidence illustrating Curley's wife's character, with the notable exception of the very telling scene in Crooks' room. Her attitude to Crooks in terms of the general cultural assumptions of the time is described, but not the cruelty of her put-down of the stable boy. This very important side of her is missed.

Paragraph structure is well controlled but there is considerable sloppiness in sentence construction and punctuation. This could have been corrected by reading through the essay before submitting it. Lexis is generally up to the task.