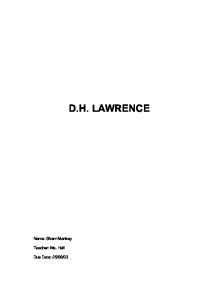 D.H. LAWRENCE Name: Shem Mankey Teacher: Ms. Hall Due Date: 25/08/03 Good morning/afternoon everyone, today I am here to speak to you all about D.H. Lawrence. D.H. Lawrence was born David Herbert Lawrence in 1885, he died in 1930. On of his most popular pieces of work is LADY CHATTERLY'S LOVER, it tells of the love affair between a wealthy, married woman, and a man who works on her husband's estate. The book was banned for some time in both the UK and US and deemed as pornographic. SONS AND LOVERS was another of D.H. Lawrence's well-known pieces of work, this novel was based on his childhood. D.H. Lawrence is one of the greatest figures in 20th-century English literature and his work is still taught, used and studied in education today and holds an important place in our society today. His principles of sexual freedom began many obscenity trials, which are still part of the connection between literature and society, his work is still relevant in modern-day society because of it strong link to society and the way we live and feel. D.H. Lawrence's work is comparable with the work of contemporary poets because of its link to society and the way we live. D.H. Lawrence was born in Eastwood, Nottinghamshire, in central England. He was the fourth child of a struggling coal miner who was a heavy drinker. ...read more.

The friends shared a house in England in 1914-15. AARON'S ROAD, appearing in 1922, showed the influence of Nietzsche, and in KANGAROO, which was completed in 1923, Lawrence expressed his own idea of a 'superman'. THE PLUMED SERPENT, which was completed in 1926, was a vivid suggestion of Mexico and its ancient Aztec religion. THE MAN WHO DIED, which appeared in 1929, was an audacious version of the story of Christ's resurrection. Instead to have Christ to go to heaven, Lawrence has him mate with the priestess of Isis. Lawrence's non-fiction works include MOVEMENTS IN EUROPEAN HISTORY, PSYCHOANALYSIS AND THE UNCONSCIOUS, STUDIES IN CLASSIC AMERICAN LITERATURE and APOCALPSE. During the First World War Lawrence and his wife were unable to obtain passports and were the targets of constant harassment from the authorities. They were accused of spying for the Germans and officially excluded from Cornwall in 1917. The Lawrence's were not permitted to emigrate until 1919, when their years of travelling began. In the 1920s Aldous Huxley travelled with Lawrence in Italy and France. Between 1922 and 1926 he and Frieda left Italy to live sporadically in Ceylon, Australia, New Mexico and Mexico. These years and different living scenarios provided settings for several of Lawrence's novels and stories. In 1924 the New York socialite Mabel Dodge Luhan gave to Lawrence and Frieda the Kiowa Ranch in Taos, in return, receiving the original manuscript of SONS AND LOVERS. ...read more.

In the second verse, he is a little more negative about his memories. The song he is listening to takes him back to memories of his past, it is told that the song "betrays me back." The speaker believes that these memories should not be felt as they are, with such emotion as they cause him to "weep" when he reluctantly returns to his past. The last line of the poem is also negative as it describes the speakers' emotion as he goes "down the flood of remembrance." He again flows "down the flood," reluctantly into the past. The tone is mostly the same, supporting the image that the speaker remembers a happy past, but is reluctant to live through the memories. He is happy to remember his past, but he feels his "manhood is cast down" by doing so. Commonly, D.H. Lawrence wrote of sexuality and mankind's natural tendencies, his work is directly connected to society and the way we live, ordinary human behaviour. PIANO is about a man with the longing for his childhood, but the reluctance to go there at the same time because he believes his reflective attitude causes him to feel as if he has lost his manhood. This poem fits with the general characteristics of D.H. Lawrence, in that he writes about memories and the man feeling emotions, and because of this feels he has lost his manhood. In society, it is not considered conventional for men to feel deep emotion, it would conflict with their so called manhood. ...read more.