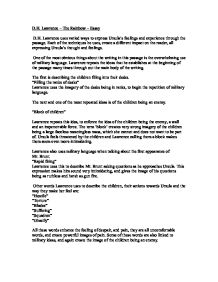 D.H. Lawrence - The Rainbow - Essay D.H. Lawrence uses varied ways to express Ursula's feelings and experience through the passage. Each of the techniques he uses, create a different impact on the reader, all expressing Ursula's thought and feelings. One of the most obvious things about the writing in this passage is the overwhelming use of military language. Lawrence repeats the ideas that he establishes at the beginning of the passage many times through out the main body of the writing. The first is describing the children filing into their desks. "Filling the ranks of desks" Lawrence uses the imagery of the desks being in ranks, to begin the repetition of military language. The next and one of the most repeated ideas is of the children being an enemy. "Block of children" Lawrence repeats this idea, to enforce the idea of the children being the enemy, a wall and an impenetrable force. ...read more.

Some of these words are also linked to military ideas, and again create the image of the children being an enemy. The majority of Lawrence's sentences within this passage are short and abrupt. This increase the tension and therefore creates and sense of urgency, and makes the reader want to read on. This also helps the reader feel what Ursula is feeling, it makes the reader feel, tense and it also makes them feel an uncertainty of what is to come, this is the way that Ursula is feeling. D.H Lawrence in this extract uses many different techniques to show the feelings or characters or convey ideas. One of the most obvious of these techniques is the use of repetition. The first thing he repeats is the idea of the children being a block, and he often refers to them as faceless, and he doesn't talk about them as individuals, but says that they are one. ...read more.

Lawrence also talks about Mr. Brunt being a machine, this fits well with the idea of him being inhuman. "Mr Brunt. Like a machine" "the man was become a mechanism" The first quote above is also a simile, it shows that his way of teaching and his personality has dissolved and he has become this machine, which is unafraid and ready to teach. D.H Lawrence's writing is also very impersonal to his main character. Ursula is only mentioned by name once in the passage, the rest of the time she is referred to as 'she'. This also gives her a sense of isolation; she is made to seem unworthy of mentioning compared to the children and Mr. Brunt who are referred to the same through out the passage. This gives a reader a sense that although the passage is about her and she is key to the story, that she is not as important, or significant as the other characters we meet on her journey. ...read more.