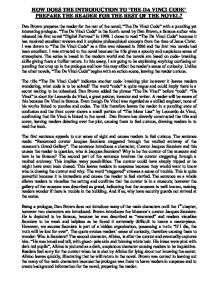 HOW DOES THE INTRODUCTION TO 'THE DA VINCI CODE' PREPARE THE READER FOR THE REST OF THE NOVEL? Dan Brown prepares the reader for the rest of the novel, "The Da Vinci Code" with a puzzling yet interesting prologue. "The Da Vinci Code" is the fourth novel by Dan Brown, a famous author who released his first novel "Digital Fortress" in 1998. I chose to read "The Da Vinci Code" because it has received excellent reviews and it explains philosophical concepts from the time of Jesus Christ. I was drawn to "The Da Vinci Code" as a film was released in 2006 and the first two novels had been excellent. I was attracted to the novel because the title gives a spooky and suspicious sense of atmosphere. The series is based in the modern world and the novels are based on code- breaking skills giving them a thriller nature. In this essay, I am going to be explaining anything confusing or puzzling that crop up in the prologue and how this may affect the reader's sense of curiosity. Unlike the other novels, "The Da Vinci Code" begins with an action scene, leaving the reader curious. ...read more.

Readers feel sorry for the curator when he is shot by Albino for lying about not knowing the secret. Albino leaves quickly, illustrating that he will return in the novel. Brown was correct in leaving out the many of the main characters because the prologue was there to leave readers in suspense and to create background information for the novel, preparing the reader. Dan Brown allows the reader to know that the book belongs to the thriller genre: "As he had anticipated, a thundering iron gate fell nearby, barricading the entrance to the suite. The parquet floor shook. Far off, an alarm began to ring." The sentence uses a number of powerful words, attracting the reader. "Thundering Iron Gate fell nearby" allow readers to visualise a gigantic, grand security system. From the phrase, you want to know why the Iron Gate fell and so this starts to quiz readers. "Barricading" stresses a sense of foreboding because readers don't understand why the curator would want to lock himself in a museum, leaving readers in suspense as they wonder if there is a purpose behind his action, contributing to the hunch that he could be in danger. ...read more.

We are told that he has a task to do before he dies, however we do not know what it is, adding to the suspense. Readers are drawn to the ending phrase, "every remaining second of his life" because it denotes that the "task" is significant for the events in the novel. You feel sorry for the curator because he is innocent and didn't deserve to be shot whereas you feel vengeful towards Albino. The sentence ends abrupt, asking readers many questions. They want to know: Is Sauniere dead? What is the desperate task he wanted to complete and what has happened to Albino? A cliff-hanger is formed by ending abruptly, evoking readers' sense of curiosity. Therefore, the last two sentences of the prologue are successful at preparing the reader for the rest of the novel. The introduction to "The Da Vinci Code" is brilliant for preparing the reader for the rest of the novel by setting a good theme. The introduction leaves you in suspense, generating an urge for you to read on. All aspects of the prologue contribute to its excellence. The prologue is kept as simplistic as possible, providing background knowledge for readers. I have deeply enjoyed the book so far and I can say that readers will continue to feel a sense of thrill as they progress through the novel. ...read more.