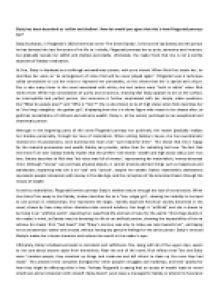 Daisy has been described as selfish and shallow. How far would you agree that this is how Fitzgerald portrays her?

﻿Daisy has been described as ?selfish and shallow?. How far would you agree that this is how Fitzgerald portrays her? Daisy Buchanan, in Fitzgerald?s 1920s American novel: ?The Great Gatsby?, is the love of Jay Gatsby and the person he has devoted the last five years of his life to. Initially, Fitzgerald portrays her as pure, attractive and innocent, but gradually reveals her selfish and shallow personality. Ultimately, the reader feels that she is not a worthy objective of Gatsby?s dedication. At first, Daisy is displayed as a strikingly extraordinary person, with pure morals. When Nick first meets her, he describes her voice as ?an arrangement of notes that will be never played again?. Fitzgerald uses a technique called synecdoche to use her voice to represent her personality, so this shows that she is special and unique. She is also many times in the novel associated with white; she and Jordon were ?both in white? when Nick meets them. ...read more.

Gatsby describes to Nick that ?her voice was full of money?, representing her materialistic, money-obsessed mind. Although ?money? can purchase physical objects, it cannot provide abstract things such as happiness and satisfaction, explaining why she is so ?sad? and ?cynical?, despite her wealth. Daisy?s materialistic shallowness represents people?s obsession with money in the Jazz Age, and the corruption of the American Dream through the misuse of wealth. As well as materialism, Fitzgerald further portrays Daisy?s shallow nature through her lack of moral values. When she drives Tom away to kiss Gatsby, Jordan describes her as a ?low, vulgar girl?, showing her inability to be loyal to one person in relationships. She represents the larger, morally deprived American society described in the novel, shown by how many other characters also commit adultery. Her laugh is ?artificial? and she is shown to be living in an ?artificial world?, depicting her superficial life and lack of care for the world. ...read more.

Daisy doesn?t even leave a message for Gatsby or attend his funeral at the end of the novel, instead moving to an unknown place and abandoning him forever, bringing the novel to its tragic close. This conveys that she was never in love with Gatsby himself, but instead in love with his possessions and the idea that he loves her. After he has passed away, she has nothing to do with him, emphasising her cruelty and carelessness. Her inability to choose between Tom and Gatsby also shows her weak will and selfishness, as at one point she says to Tom she ?never loved him?, then a few moments later she abandons Gatsby for good.. Fitzgerald?s clear portrayal of Daisy?s selfishness shows the hollowness of the upper class and their lack of empathy for anyone else. Daisy starts off as a promising character, but as the novel progresses her shortcomings- shallowness and selfishness- are made clear. In the end, she is the novel?s most disappointing character, and an unworthy goal for Gatsby to strive for. Fitzgerald?s overall negative portrayal of Daisy adds tragedy to Gatsby?s hopeless, but incorruptible dream. ...read more.

A good essay title that provides scope to look in detail at the character of Daisy and her role in 'The Great Gatsby'. The points are well supported and refer directly to evidence from the novel. A more rounded response may have looked at the reasons that could be argued against the description of Daisy as 'selfish and shallow' and to consider that Daisy was in a class and social position that provided her with few choices about how to act. In order to fully explore the character of Daisy the essay could also have looked at the role and actions of some of the other characters and how this impacted the portrayal of Daisy.