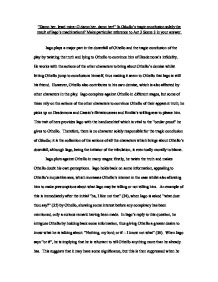 "d**n her, lewd minx: O d**n her, d**n her!" Is Othello's tragic conclusion solely the result of Iago's machinations? Make particular reference to Act 3 Scene 3 in your answer. Iago plays a major part in the downfall of Othello and the tragic conclusion of the play by twisting the truth and lying to Othello to convince him of Desdemona's infidelity. He works with the actions of the other characters to bring about Othello's demise whilst letting Othello jump to conclusions himself, thus making it seem to Othello that Iago is still his friend. However, Othello also contributes to his own demise, which is also affected by other characters in the play. Iago conspires against Othello in different stages, but some of these rely on the actions of the other characters to convince Othello of their apparent truth; he picks up on Desdemona and Cassio's flirtatiousness and Emilia's willingness to please him. This trait of hers provides Iago with the handkerchief which is vital to the "ocular proof" he gives to Othello. Therefore, there is no character solely responsible for the tragic conclusion of Othello; it is the collection of the actions of all the characters which brings about Othello's downfall, although Iago, being the initiator of the tribulation, is eventually morally to blame. Iago plots against Othello in many stages: firstly, he twists the truth and makes Othello doubt his own perceptions. Iago holds back on some information, appealing to Othello's inquisitiveness, which increases Othello's interest in the case whilst also allowing him to make presumptions about what Iago may be telling or not telling him. ...read more.

This also demonstrates Iago's control over the conversation and how Iago manipulates Othello's mind to aid it in coming to the conclusion most beneficial to Iago. The second stage of Iago's plotting supplies Othello with verbal proof which applies directly to his accusation. This interests Othello but he remains unconvinced as he wants to be provided with "ocular proof", which is Iago's third stage of plotting. The two stages of providing proof work together to totally convince Othello of Desdemona's infidelity with Iago telling Othello twisted truths or plain lies and tricking Cassio into saying things which are misinterpreted by Othello. Iago also seems to tell people what they are seeing so that he can twist the truth for his own advantage. This is a recurring trait of Iago's as, not only does Iago claim that he "cannot think it/That [Cassio] would steal away so guilty-like" (38-9), but he also attempts to convince people that Bianca is a conspirator by asking them to "perceive the gastness of her eye" (V.i.106), when Bianca has no gastness, nor is guilty of any conspiracy. When Iago cannot twist truth to have any greater an affect on Othello, he begins simply to lie to Othello. This lets him tell Othello whatever he wants and lets him manipulate Othello's mind in more ways than he was able to when he was restricted to merely distorting the truth. The main "ocular proof" is the handkerchief which Othello witnesses Cassio wiping his beard with which has been planted by Iago for this exact effect, once again proving Iago's intelligence and cunning and heightening the dramatic irony as the audience know the truth behind this 'proof'. ...read more.

Emilia does this fully, not even mentioning that it was she who delivered the handkerchief to Iago when Desdemona is in great need of this information. This all shows her true loyalty to Iago, which makes the ending even more tragic as the main proof for Iago's lie is supplied by the accused's loyal friend who is putting the husband who she loves and trusts before her friend, even when the audience know that Iago deserves neither love nor trust. However, Emilia does not do all of this because she obtains pleasure from it, she does it because it was a contemporary expectation for a wife to obey her husband. Therefore the patriarchal society can be blamed for Emilia providing the handkerchief, not Emilia herself. Making the conclusion of Othello all the more tragic is the fact that Othello has to look into himself as well as Iago when considering and trying to come to terms with the awfulness of his own actions after he has found out the truth. The small epiphanies of Emilia and Roderigo, who find out the truth for themselves, albeit not to its full extent, come too late as Othello has already been persuaded and is on a road to destruction. Although Iago plays the principal role in the downfall of Othello, and is in the end morally to blame as it was he who initially suggested the affair, several other factors are contributory, the most prominent of which are the handkerchief and Othello's willingness to jump to conclusions and conceivable natural jealousy. Consequently, the tragic conclusion of Othello is not solely the result of Iago's machinations. ?? ?? ?? ?? ...read more.