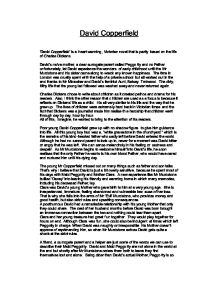 David Copperfield 'David Copperfield' is a heart warming, Victorian novel that is partly based on the life of Charles Dickens. David's na�ve mother, a dear surrogate parent called Peggotty and no Father unfortunately, let David experience the wonders of early childhood until the Mr Murdstone and his sister came along to wreck any known happiness. The time in London was cruelly spent with the help of a private school but all worked out in the end thanks to Mr Micawber and David's feminist Aunt, Betsey Trotwood. The dirty, filthy life that the young lad followed was washed away and never returned again. Charles Dickens chose to write about children as it created pathos and drama for his readers. Also, I think the other reason that children are used as a focus is because it reflects on Dickens' life as a child. It is all very similar to his life and the way that he grew up. The lives of children were extremely hard back in Victorian times and the fact that Dickens was a journalist made him realise the hardship that children went through day by day, hour by hour. All of this, I imagine, he wanted to bring to the attention of his readers. ...read more.

Mr Murdstone clearly didn't obey these vows. When Clara became sick, she could not look after the baby and David and slowly the began to deteriorate into nothing. Throughout her illness her 'husband' ordered her around and neglected her until she sadly passed away. Lastly, he is no friend, has no friends and never will. Mr Murdstone, a man who is perfect only for himself. Clara doesn't enjoy reprimanding David, something she and Mr Murdstone do not have in common. He says to her, "what's this? Clara, my love, have you forgotten? firmness, my dear!" He is so omnipotent and impulsive that the household members just stand by his rules and demands. His use of words when speaking are very intimidating, especially towards the poor servant Peggotty. She turns from a blissful, happy friend to a poor unhappy servant who is treated with no respect and dignity from Mr Murdstone, which concludes with her leaving her home of many, many years. This whole act EM puts on is negative, although he was trying to offer David a better welfare for his young life. Many people could say he also wrecked the best part of his life - the childhood part. Jane Murdstone, sister of Edward, and just as cruel and evil as he, is tagged along with her brother into the happy lives of David, Clara and Peggotty and managed to turn the sun into rain and happy into sad. ...read more.

Betsey Trotwood knew David whilst he was in his Mother's womb. When he arrived into the world she fled because 'he' was not a 'she'. When David turned up on her neatly cut grass and prim rose garden she was flabbergasted and couldn't believe what was in front of her. She took David into her own hands with the help of her dear friend Mr Micawber and they gradually turned David's life around, back into the happy one he once had shared with his mother and Peggotty. Miss Trotwood's opinion of boys and men changed without a doubt when she realised how blessed she was with a kind hearted nephew, who only wanted love and affection. In the end, everything worked out well for the boy who lost a life because of one evil man and his shadow sister. David's parents are together in peace, Peggotty has found new love, the school and work torture is over and everyone is happy apart from Edward Murdstone and Jane Murdstone, who only have each other to blame for the way their lives have worked out. David Copperfield brought a ray of light into everyone's lives, even Charles Dickens who provided the heart-warming story of a lifetime. The readers are entranced and left feeling bright and happy - a truly magnificent fictional tale for all. ?? ?? ?? ?? ...read more.