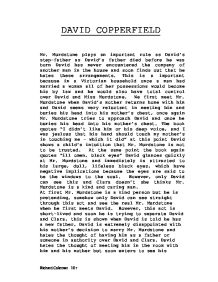 DAVID COPPERFIELD Mr. Murdstone plays an important role as David's step-father as David's father died before he was born David has never encountered the company of another man in the house and soon finds out that he hates these arrangements. This is a important because in a Victorian household once a man had married a woman all of her possessions would become his by law and he would also have total control over David and Miss Murdstone. We first meet Mr. Murdstone when David's mother returns home with him and David seems very reluctant in meeting him and buries his head into his mother's chest, once again Mr. Murdstone tries to approach David and once he buries his head into his mother's chest. The book quotes "I didn't like him or his deep voice, and I was jealous that his hand should touch my mother's in touching me - which it did" at this point David shows a child's intuition that Mr. Murdstone is not to be trusted. At the same point the book again quotes "ill omen, black eyes" David glances quickly at Mr. ...read more.

Murdstone, but is interrupted half way through the term and is shocked to find his mother and brother have died, David is unbelievably up-set and is suddenly rejected by Mr & Miss. Murdstone as they think that David should have died instead and Clara and the baby. David is punished by being deprived of education and is sent to work at a factory sticking labels on bottles. I think this punishment is a lot worse than the beatings because the beatings will stop later on in life, but not having an education will haunt him for the rest of his life as he will not be able to get a job that pays suitable money for his well being. Miss. Murdstone who is Mr. Murdstone's sister invites herself the house "A gloomy looking lady she was; dark, like her brother who she greatly resembled in face and voice" "she brought with her two uncompromising hard, black boxes, she took her money out of a hard steel purse and a bag with hard steel chains" these quotes suggest she is less feminine and a cold, hard woman who emulates her brother both physically and emotionally. ...read more.

Murdstone cannot stand all of this being said to him and walks away, Miss Murdstone stands up to Mr. Murdstone and shows that she is a stronger woman than he is a man. This shows that she has overcome her 'fear' of men from earlier in her life. My conclusion of the book is that Mr. Murdstone has the greatest effect on David's life as he is the first man he has ever had in his life as his father died before he was born. Now he is feeling the pain and un-comfortableness of another man in the house. Not only this, Mr. Murdstone drove David's mother in to depression which most probably helped to kill her, David was now on his own and couldn't stand all of the punishment from Mr. Murdstone and so decided to run away to his aunt's house. However, if David's mother met another person things would have turned out differently and David would have led a normal life with his new kind stepfather and his mother and possible more brothers and sisters. This is why I think Mr. Murdstone had the biggest impact on David's life. 2 Richard Coleman 10 r Richard Coleman 10 r ...read more.