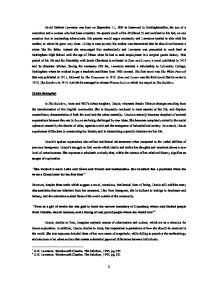 David Herbert Lawrence was born on September 11, 1885 at Eastwood in Nottinghamshire, the son of a coalminer and a woman who had been a teacher. He spends much of his childhood ill and confined to his bed, on one occasion due to contracting tuberculosis. His parents would argue constantly and Lawrence tended to side with his mother, to whom he grew very close. Living in near poverty his mother was determined that he should not become a miner like his father. Instead she encouraged him academically and Lawrence was persuaded to work hard at Nottingham High School until the age of fifteen when he had to seek employment in a surgical goods factory. This period of his life and his friendship with Jessie Chambers is reflected in Sons and Lovers, a novel published in 1913 and its character Miriam. Saving the necessary �20 fee, Lawrence attained a scholarship to University College, Nottingham where he worked to get a teacher's certificate from 1906 onward. His first novel was The White Peacock that was published in 1911, followed by The Trespasser in 1912. Sons and Lovers was the third novel that he wrote in 1913, The Rainbow in 1915. And the he managed to release Women In Love which is a sequel to The Rainbow. Ursula Brangwen In The Rainbow, Anna and Will's eldest daughter, Ursula, witnesses drastic lifestyle changes resulting from the transformation of the English countryside. ...read more.

Contrarily, Ursula despises Anton because to her, he represents a sense of nothingness. "She knew that if she turned, she would die. A strange rage filled her, a rage to tear things asunder" 5 Although during the introductory period of their relationship, Ursula is engrossed with Skrebensky's demeanor of urbane decorum, when he is placed in a setting of transcendent nature, Ursula only sees him as mechanized and spiritually unformed. However, while Ursula is momentarily elevated by the presence of the moonlight, her own feelings degenerate to lust, and she destroys the embryonic spiritual self that Anton does contain. "She was there fierce, corrosive, seething with her destruction, seething like some cruel, corrosive salt around the last substance of his being" 6 During Anna and Will's moonlit scene, their emotions are sustaining and vital. For Ursula and Anton, the episode turns base and annihilating. As opposed to her ancestors, Ursula explores beyond Skrebensky's image of polished cultivation, and to a degree perceives his underlying spiritual void. Ursula's intimacy with Skrebensky is completely suspended when he leaves for the Boer War. Ursula, undetered by her experience with Anton, continues to investigate beyond farming life. She leaves for school, where she finds herself drawn to her class-mistress, Winifred Inger. Winifred seems to represent ideals which are similar to what Ursula had previously found in Anton. ...read more.

However, there are gender differences in how the characters participate in this new urbanity. On the whole, although their motivations change, the women are more outward looking. Tom Brangwen's mother looks toward the city with the hope of morally uplifting her children; in contrast, Lydia Brangwen was raised in a cosmopolitan setting, but denounces it for an unknown, natural world. Anna Brangwen yearns for the finer habits of the ideal lady; and her daughter, Ursula, believes that immigrating to the city will allow her to acquire knowledge. While, to a certain degree, men are also enchanted with the new ideas offered by urbanization, these dissimilarities in how men and women perceive themselves and the external world greatly affect their relationships. With the exception of Lydia, the women are typically characterized as dissatisfied. " It is a tribute to the prodigious optimism and persuasiveness of Lawrence's vision that the secret she holds seems worth the keeping until the world is fit to receive it"10 As a conclusion, Lawrence cannot give the reader a happy ending with Ursula's character because with a personality so profound and complex there can be no easy solution to her fulfillment in life. "her individual consciousness reaches out and embraces the real social world, transforming it, binding it around with the rainbow, fertilizing its internal essence"11 He portrays life itself in this relationship and the ecstasy, the misery and the conflict inherent in the deep relationships between men and women, but all the rainbow suggests, there is always hope. ...read more.