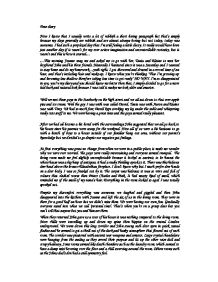 Dear diary Now I know that I usually write a lot of rubbish a short boring paragraph but that's simply because my days generally are rubbish and are almost always boring but not today, today was awesome. I had such a perplexed day that I'm still feeling a little dizzy. It really would have been just another day if it wasn't for my over active imagination and uncontrollable curiosity, but it wasn't and this is how it started... ...This morning Joanne rang me and asked me to go with her, Tania and Elaine to meet her boyfriend John and his three friends. Naturally I hesitated since it was a Saturday and I wanted to stay home and do my homework...yeah right. I got showered and dressed in a record time of an hour, and that's including hair and make-up. I know what you're thinking 'That I'm growing up and becoming less shallow therefore taking less time to get ready' NO WAY. I'm so disappointed in you, you're my diary and you should know me better then that, I simply decided to go for a more laid back and natural look because I was told it makes me look older and smarter. Well we met these guys in the Starbucks on the high street and we all sat down to chat over apple pies and ice cream. Well the guy I was with was called David, Tania was with Aaron and Elaine was with Tony. ...read more.

Joanne and John stayed behind and David and Aaron tried to usher Tania and I into the guest rooms but we were both frozen on the spot and the end of the corridor astonished by what we had just experienced. Elaine, being the stronger one of three of us requested for the guys to take us home, and she became defensive when they tried to persuade her otherwise. So the guys left to bring the car round and I came out of my daze and suggested that we inform Joanne in case she wants to come with us. I asked one of the girls to come up with me but they weren't having any of it. So I moved stealthily up the stairs with my back against the railing in fear of something creeping up behind me. I got to the top of the stairs and a floorboard creaked surprising me and causing me to scream at the top of my lungs and the staircase began to crumble and collapse. I frantically started to scan all directions practically breaking my neck in confusion and fear searching for a logical explanation. I was screaming constantly until my throat went dry, and all I could let out were desperate squeaks. I ran to John's room for Joanne's assistant and the door slid open before I even touched the handle exposing a room half the size of the room John had exhibited to us earlier. ...read more.

posts of the Egyptian style queen size bed which they had come from and the genie theme that was plastered over what seemed to be the very last room I would ever see. Then the floor gave way just as the staircase had earlier and I plunged through the floorboards like water through a drain. I landed with a thud and passed out. I was shocked to hear my name being called from a distance again. I had been so sure I was dead and all I wanted was a moment's peace. I couldn't take any more surprises and I yearned to be home in bed. I fluttered my eyelids before regaining full consciousness. I frantically scanned around the room ready to defend my self from my next attack but I wasn't under attack. Instead I was on the sofa in the living room with my three girl friends and the guys surrounding me with worried looks on their faces. O.k. Diary, here's were you get to laugh at me, it was all a dream it turns out that I had a bit of a caffeine rush from Starbucks naturally followed by a crash. I felt so stupid and embarrassed that I begged to be taken home and here I am. So the most interesting day I've had this year was all a large figment developed from too many horror movies. Anyhow all that drama real all not has tired me out so I'm off to bed this is me signing out bye diary. Melinda ...read more.