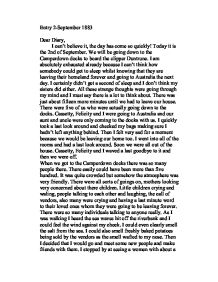 Entry 2-September 1883 Dear Diary, I can't believe it, the day has come so quickly! Today it is the 2nd of September. We will be going down to the Camperdown docks to board the clipper Duntrune. I am absolutely exhausted already because I can't think how somebody could get to sleep whilst knowing that they are leaving their homeland forever and going to Australia the next day. I certainly didn't get a second of sleep and I don't think my sisters did either. All these strange thoughts were going through my mind and I must say there is a lot to think about. There was just about fifteen more minutes until we had to leave our house. There were five of us who were actually going down to the docks. Cassetty, Felicity and I were going to Australia and our aunt and uncle were only coming to the docks with us. I quickly took a last look around and checked my bags making sure I hadn't left anything behind. Then I felt very sad for a moment because we would be leaving our home too. I went into all of the rooms and had a last look around. Soon we were all out of the house. Cassetty, Felicity and I waved a last goodbye to it and then we were off. When we got to the Camperdown docks there was so many people there. There easily could have been more than five hundred. It was quite crowded but somehow the atmosphere was very friendly. ...read more.

Everyone was just wishing that their berth would be nice, cosy and comfortable as it was where they would be spending the next four months ahead of them. After we had handed the Captain our tickets everyone was told that they were allowed to wander around the ship to find their berths. At last everybody was looking around the ship, eager to find their berths. After a little while Cassetty, Felicity and I had found our berths. Fortunately all of ours were next to each other. We are reasonably lucky because all three of us are single women and the single woman's compartment is a very comfortable place and is aft. All the single women's berths are open and have direct accommodation with the p**p deck. On the main deck only four lavatories and baths have been constructed for the use of the emigrants. There is also an oven capable of baking two hundred and forty penny loaves at once. In the galley there are two cooking ranges, one for the ship's crew and the other for the emigrants. In all there are approximately four hundred and fifty souls on board and fifty crewmembers. Each day it has been guaranteed that the patent condenser will produce four thousand, five hundred and fifty litres of fresh water a day, which means that each individual may get up to nine litres of water per day. After the Captain had finished speaking to us about all these essential facts everyone went to explore the ship. ...read more.

Cassetty, Felicity and I just watched the city where there was once joy and happiness for us to stay in slip away, quicker than one single tick of a clock. Tears were staining down our cheeks as our hearts were being torn apart. For the rest of my life I will still remember the moment hen I raised my shaky hand and slowly waved goodbye to my homeland where I was leaving for the rest of my living days. I could still see my aunt and uncle in the distance so I waved to them madly. I was once at the Camperdown docks before with my mum when I was about three years old and I still vaguely remember her letting me touch the water as I kept begging her to. Those were the great days though when our lives were full of complete happiness and I just keep on praying that life will be even better in Australia. I waved goodbye one last time with all the power left in me and that was going to be the last of Dundee but I still kept on watching the city trail away as the huge buildings became little dots. That day everybody was quite sad and tired so most people fell asleep or read a book but nothing too taxing. To be honest I fell asleep for the rest of the night and I must say anyone you looked at did seem a little downhearted maybe after leaving their loved ones. Anyway I better stop writing seeing as I have a lot to do for the fourth month journey ahead of us. ...read more.