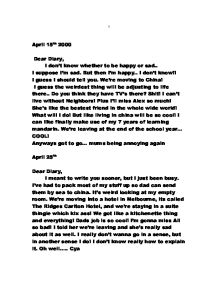 Dear Diary April 15th 2000 Dear Diary, I don't know whether to be happy or sad.. I suppose I'm sad. But then I'm happy.. I don't know!! I guess I should tell you. We're moving to China! I guess the weirdest thing will be adjusting to life there.. Do you think they have TV's there? s**t! I can't live without Neighbors! Plus I'll miss Alex so much! She's like the bestest friend in the whole wide world! What will I do! But like living in china will be so cool! I can like finally make use of my 7 years of learning mandarin. We're leaving at the end of the school year... COOL! Anyways got to go... mums being annoying again April 25th Dear Diary, I meant to write you sooner, but I just been busy. I've had to pack most of my stuff up so dad can send them by sea to china. It's weird looking at my empty room. We're moving into a hotel in Melbourne, its called The Ridges Carlton Hotel, and we're staying in a suite thingie which kix a*s! We got like a kitchenette thing and everything! Dads job is so cool! I'm gonna miss Ali so bad! I told her we're leaving and she's really sad about it as well. I really don't wanna go in a sense, but in another sense I do! I don't know really how to explain it. Oh well..... Cya June 3rd Dear Diary, I can't believe it! ...read more.

July 11th Dear Diary, Today I talked to Amy about being a Christian and after ages of badgering her she told me that because Christians were led from overseas by foreigners, the government doesn't like us, and that we had faulty thinking, because we weren't communists. I think Dads having a real hard time at work because he's snapping at us and shouting at us when we do little things wrong. He's normally so nice I don't think I've ever heard dad shout at us before this! At least Amy's still friends with me. The boys' at school have started to pick on me calling me names. It's not much, but it hurts. I'm gonna go n talk to mum n josh now.. cya July 12th Dear Diary Mum said Dad's having a really really bad time at work. She said that his boss is always screaming at him and shouting at him for little things and saying why can't he work harder! We've only been here for 12 days please God let the nightmare end. July 15th Dear Diary, Personally, I think Dad's gonna get fired.. s**t! We have like no money since we spent it all to move here. d**n. This is so unfair picking on people because of what they choose to believe in. School sucks. I'm being picked on more and Josh is actually coming home with bruises. God help us. Please. I don't want Dad to get fired. How will we live? ...read more.

One of my men overheard him speaking on the phone earlier, before he bought the coke. He was speaking to your father, I believe, who is being held in prison for being a Christian. " I collapsed. I literally collapsed. My knees went and I found myself on the floor crying. Crying for josh. I don't know how long I was on the floor for, but I know it was for a long time. Talk about a bad day. I was lying on a couch when some other man comes up to me and hands me a Chinese newspaper. On the cover there was a picture of a blonde lady, dead hanging from a ceiling fan. It was my mother. Like my life wasn't bad enough. I couldn't believe it. My brother and my mother.. both.. dead. I couldn't believe it this couldn't be happening to me! It couldn't this was me! My life! I've stayed on this cough since Tuesday. It's Friday now. I've only moved off the couch to go to the bathroom. I don't know what to do. July 26th Dear Diary, This is the last entry I'm writing. Ever. I've decided to kill myself. I don't know how and I'm not going to tell you how. I hope one day someone will find this, and reads it and I hope that this will change the Chinese law. Though I doubt it. I can't wait. I hope I go to heaven so I can meet mum and josh. If anybody ever reads this, Alex, Dylan, You guys are the bestest friends in the world and I'm sorry it's had to come to this. I love you both. ...read more.