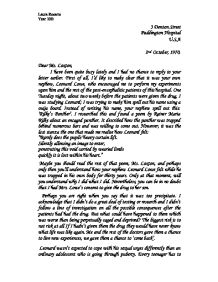 3 Denton Street Paddington Hospital U.S.A 2nd October, 1970. Dear Ms. Loxton, I have been quite busy lately and I had no chance to reply to your letter earlier. First of all, I'd like to make clear that it was your own nephew, Leonard Lowe, who encouraged me to perform my experiments upon him and the rest of the post-encephalitic patients of this hospital. One Tuesday night, about two weeks before the patients were given the drug, I was studying Leonard; I was trying to make him spell out his name using a ouija board. Instead of writing his name, your nephew spell out this: 'Rilke's Panther'. I researched this and found a poem by Rainer Maria Rilke about an encaged panther. It described how the panther was trapped behind numerous bars and was willing to come out. ...read more.

The biggest risk is to not risk at all If I hadn't given them the drug they would have never know what life was like again. Me and the rest of the doctors gave them a chance to live new experiences, we gave them a chance to 'come back'. Leonard wasn't expected to cope with his sexual urges differently than an ordinary adolescent who is going through puberty. Every teenager has to get used to their own sexual urges. I'm well aware that Leonard didn't have the opportunity to go through puberty or teenage years as they should be, but while he was 'awake' he didn't have any severe problems through having to deal with his 'sexual urges'. As you well know he met a young lady named Paula and had quite a lot of affection towards her and vice versa. ...read more.

You accuse me of having played God with Leonard Lowe and the other post-encephalitic patients of this hospital. I repeat that Mrs. Lowe and familiars of the patients authorised me to give them the dope. I didn't play God with anyone, Ms. Loxton. All I did was to make them come out of their miserable state. My assistants and I gave them the opportunity to be in this world again, the chance to move about, converse and think properly over again, even though this wasn't eternally. You have probably heard of the following: "It's better to have loved and lost, than never to have loved at all". Well, if you change the words 'loved' for 'had' you end up with "It's better to have had and lost than never to have had at all". They were given human skills, emotions and passions back, and despite the fact that they were taken away from them, they had had them once again and that will stay in their memories forever. Yours sincerely, Laura Recarte Year 10B ...read more.