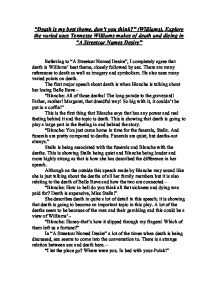 "Death is my best theme, don't you think?" (Williams). Explore the varied uses Tennesse Williams makes of death and dieing in "A Streetcar Names Desire" Referring to "A Streetcar Named Desire", I completely agree that death is Williams' best theme, closely followed by s*x. There are many references to death as well as imagery and symbolism. He also uses many varied points on death. The first major speech about death is when Blanche is talking about her losing Belle Reve - "Blanche: All of those deaths! The long parade to the graveyard! Father, mother! Margaret, that dreadful way! So big with it, it couldn't be put in a coffin!" This is the first thing that Blanche says that has any power and real feeling behind it and the topic is death. This is showing that death is going to play a large part in the feeling in and behind the story. "Blanche: You just came home in time for the funerals, Stella. And funerals are pretty compared to deaths. ...read more.

Seeing her husband have s*x with another man and then blow his head off within the time span of two hours causes a strange equation and connection between s*x and death. The way he killed himself could also be perceived as a h********l reference - sticking the gun in his mouth. "A vendor comes around the corner. She is a blind MEXICAN WOMAN in a dark shawl, carrying bunches of those gaudy tin flowers that lower class Mexicans display at funerals and other festive occasions." Here, the woman carrying the funeral flowers is symbolising two things - Death and Blanche. It is ambiguous whether or not any of the other characters can see or are aware of the presence of the Mexican woman except from Blanche. Blanche's thoughts seem to be provoked by the Mexican woman and it almost seems as if the Mexican woman is a representation of Blanche herself, and the Mexican woman is walking around celebrating death which shows the death within Blanche's past and presence. ...read more.

my first lover's eyes." Blanche brings the equation of s*x and death together again here as she is planning of dieing with a man by her side. This speech made by Blanche nearing the end of the play also has a slight reference to Othelia in Shakespeare's "Hamlet". Othelia died in water and that is what Blanche is dreaming about doing. - "Queen: One woe doth tread upon another's heel, So fast they follow. Your sister's drown'd, Laertes. Laer: Drown'd? O, where?" (Hamlet) In conclusion Tennesse Williams uses a lot of different views on death, the connection between s*x, the death of other things except people like the death of Belle Reve and Blanche's mind, and the death of people who happen to all be someone in Blanche's Past. Williams uses different angles to express the theme of death, symbolism of the death of Belle Reve, the Mexican woman symbolising the death of Blanche's mind, and the outward talking of real death of people. This makes it an important topic as it depicted in so many ways. Death is defiantly in the running for Tennesse Williams' best theme in "A Streetcar Named Desire". ...read more.