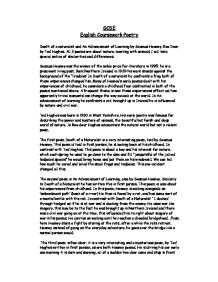 Death of a naturalist and An Advancement of Learning by Seamus Heaney, Roe Deer by Ted Hughes. All 3 poems are about nature; meeting with animals I will take special notice of similarities and differences.

GCSE English Coursework Poetry Death of a naturalist and An Advancement of Learning by Seamus Heaney, Roe Deer by Ted Hughes. All 3 poems are about nature; meeting with animals I will take special notice of similarities and differences. Seamus Heaney was the winner of the noble price for literature in 1995; he is a prominent living past. Born Northern Ireland in 1939 his work stands against the background of the 'Troubles' In Death of a naturalist he confronts a frog both of these experiences changed him. Many of Heaney's early poems dealt with his experiences of childhood, he considers a childhood fear confronted in both of the poems mentioned above. A frequent theme is now these experiences affect us; how apparently trivial moments can change the way we look at the world. In An advancement of learning he confronts a rat, brought up in Ireland he is influenced by nature and civil war. Ted Hughes was born in 1930 in West Yorkshire. His early poetry was famous for describing the power and mystery of animals, the beautiful but harsh and deep world of nature. In Roe-deer Hughes encounters the natural world but not a violent poem. The first poem Death of a Naturalist is a very interesting poem, told by Seamus Heaney. This poem is told in first person, he is looking back at his childhood. In contrast with Ted Hughes. This poem is about a boy and his interest for nature, which each spring he used to go down to the dam and fill "jampotsful of the jellied tadpoles specks" he would bring home and put them on his windowsill. ...read more.

Death as mentioned in the title 'Death of a Naturalist.' The title is confusing, we expect to read about a death, instead we find the story of a young boys fascination with frogspawn. As we read on we discover that the death is not literal, it is symbolic. A naturalist is a person who is interested in nature and wildlife, the young boy in this case; the death is of his interest in nature. After the encounter with the frogs he is no longer a naturalist. This poem is about 'rites of passage', the move from childhood into adulthood. The poem could also symbolise the 'death' of childhood innocence. The innocent view of the kindness of nature is destroyed, never to be regained. In 'Death of a Naturalist' his childhood memories had destroyed his childhood perspective, as an adult he now realises looking back how the frogs wouldn't attack him, the mammy and daddy frogs were now just the bullfrog and frog. He now also realises how the frogs are not yellow if it is sunny and brown when it rains but only they appear to be different from the different brightness and shades of colours showing his lack of innocence in both poems. In Roe-deer colours are also involved but they are dull colours such as grey and black. In An Advancement of Learning 'Heaney' learns how to fight against the rat by staring at it. Heaney goes a step further in learning. ...read more.

the heat of the sun as though it is punish him.This gives the effect of how hot it use to be.in contrast, there is no personification in An Advancement of Learing. However, in Roe-deer there is personification, "The snow took them" It is not possilble for the snow to take the deers lost to his sight as of snow flakes. The main comparison which I noticed between these poems is that all three poems are concerned with nature. In An Advancement of Learing, the poem is about a rat. In Death of a naturalist there is a frog and Roe-deer, there are deer. Another comparison is that all three poems are written in first person,voice of author an personal experience. This shows that they are all telling about there own experiences. But in Hughes poem he is writing about an experience which took place when he was old, we know this because he was driving. However, Heaney is much younger in both poems, this can be proven by, "Miss Walls would tell us how the daddy frog was called the bullfrog and how he croaked and how the mammy frog laid hundreds of little eggs", also another voice that of teacher add to realism .Heaney is being talken to by a primary school teacher and therefore it shows he is young. In An Advancement of Learing there is no clear evidence that he is young but at the beginning Heaney does not cross the bridge and takes the easy route, and this is an action of an adventures 10 year old. ...read more.