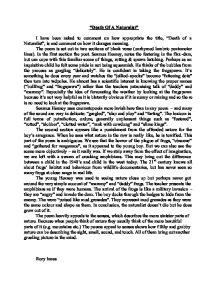 "Death Of A Naturalist" I have been asked to comment on how appropriate the title, "Death of a Naturalist", is and comment on how it changes meaning. The poem is set out in two sections of blank verse (unrhymed lambric pentameter lines). In the first section the poet. Seamus Heaney, notes the festering in the flax-d*m, but can cope with this familiar scene of things, rotting & spawn hatching. Perhaps as an inquisitive child he felt some pride in not being squeamish. He thinks of the bubbles from the process as gargling "delicately". He is confident in taking the frogspawn. It's something he does every year and watches the "jellied-specks" become "fattening dots" then turn into tadpoles. ...read more.

The lexicon is full terms of putrefaction, ordure, generally unpleasant things such as "festered", "rotted", "slobber", "clotted water", "rank with cowdung" and "slime kings". The second section appears like a punishment from the offended nature for the boy's arrogance. When he sees what nature in the raw is really like, he is terrified. This part of the poem is ambiguous. We see that the horror of the plague of frogs, "obscene" and "gathered for vengeance", as it appeared to the young boy. But we can also see the scene more objectively - as it really was. If we strip away from the effect of imagination, we are left with a swarm of croaking amphibians. ...read more.

The teacher presents the amphibians as if they were humans. The arrival of the frogs is like a military invasion - they are "angry" and invade the d*m. The boy ducks through the hedges to hide from the enemy. The were "poised like mud grenades". They represent mud grenades as they were the same colour and shape as them. In conclusion, the naturalist doesn't die but he does grow out of it. The poem heavily appeals to the senses, which describes the more sinister parts of nature. Because when people think of nature they usually think of the more beautiful parts of it (e.g. mountains etc.) The poems appeal to senses shows how filthy and grubby nature can be describing the sight, smell, sound, and touch. All of them bring out another grueling picture in the mind. Rory Innes ...read more.

This is a very confident essay that makes the majority of it's points clearly (and happily tackles more intricate analysis) and presents so really fresh ideas about the poem 'Death of a Naturalist'. The candidate's answer is not very focused ...

This is a very confident essay that makes the majority of it's points clearly (and happily tackles more intricate analysis) and presents so really fresh ideas about the poem 'Death of a Naturalist'. The candidate's answer is not very focused on the title though, and feels like an all-inclusive analysis of language, imagery and to some extent the poem's structure (though as with most Heaney poem's the blank verse requires little analysis other than that it contributes to a very conversational tone, like a recalled memory). This is where the majority of the lost marks are. The analysis is fine enough but hardly any of it pertains to the title, and the small section that does - arguably a single line - does not make the point very clearly. It is understandable, what the candidate is trying to say, but the clarity is compromised in some section and this is one of them. I recommend ensuring a little more clarity by really pinning down the analytical point, to drive home the comments you make. The candidate appears to be trying to suggest that a realisation of the alternate, sinister darkness of nature - of how cruel and ugly adult life can be - led Heaney to "grow out of it", as if in his own growth he began to see the dangers of nature which childhood naivete protects us from, yet this could be made much clearer and would've been a far more conclusive analysis of the title.

The Level of Analysis is good, but by no means exhaustive. The candidate comments on a number of things pertaining to the title, though rarely makes the link explicit except for one instance, and this limits the essay considerably, as with the appropriate level of focus dissipated on the question, there would be nothing stopping this from being a strong A grade answer. However, due to the present issues, it is limited to a high C grade for GCSE.

Whilst some may disagree with the candidate's interpretation of Heaney's attitude towards the frogspawn, suggesting that "mummy frog" and "daddy frog" are deliberately patronising and that his interest is "near scientific", there is plenty of evidence adequately cited and quote from the poem to suggest this candidate is not whipping made-up assumptions out of the air. All their analysis is nicely backed up with quotes and further elaborative comments to form a cohesive essay. If only they could iron out the few discrepancies in some of the analysis and focus more clearly on the question then this would be an flawless essay.

The Quality of Written Communication here is good. There is no cause for concern with regard to miscommunication as a result of poor grammar, spelling or punctuation, and even minor errors are kept to a minimum.