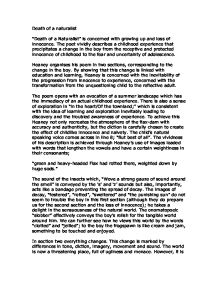 Death of a naturalist

Death of a naturalist "Death of a Naturalist" is concerned with growing up and loss of innocence. The poet vividly describes a childhood experience that precipitates a change in the boy from the receptive and protected innocence of childhood to the fear and uncertainty of adolescence. Heaney organises his poem in two sections, corresponding to the change in the boy. By showing that this change is linked with education and learning, Heaney is concerned with the inevitability of the progression from innocence to experience, concerned with the transformation from the unquestioning child to the reflective adult. The poem opens with an evocation of a summer landscape which has the immediacy of an actual childhood experience. There is also a sense of exploration in "in the heart/Of the townland;" which is consistent with the idea of learning and exploration inevitably leading to discovery and the troubled awareness of experience. To achieve this Heaney not only recreates the atmosphere of the flax-dam with accuracy and authenticity, but the diction is carefully chosen to create the effect of childlike innocence and naivety. ...read more.

We can further see how he views this world by the words "clotted" and "jellied"; to the boy the frogspawn is like cream and jam, something to be touched and enjoyed. In section two everything changes. This change is marked by differences in tone, diction, imagery, movement and sound. The world is now a threatening place, full of ugliness and menace. However, it is not the world that has changed so much as the boy's perception of it. There is still a strong emphasis on decay and putrefaction, but now it is not balanced by images suggesting the profusion of life. The sounds are no longer delicate (line 5), but are "coarse", "bass" and "farting". "The slap and plop were obscene threats." The onomatopoeic "slap" and "plop" slow down the pace here and the full stop gives emphasis to the feeling of threat. The "warm thick slobber/Of frogspawn" has become "The great slime kings" and the transformation is further suggested by the threatening image of the frog as "mud grenades". ...read more.

He has become aware not only of his own individual existence, but also of that of other living things. Although not explicitly stated, the words "bass", "gross-bellied" and "coarse croaking" remind us that the boy himself is going through changes. Leaving behind the receptive innocence of childhood and a feeling of being at ease with the natural world (the death of a naturalist of the title), the language of the second section expresses the boy's sense of distaste and fear for the physicality and sexuality of adolescence that he is now beginning to experience. The poem recreates and examines the moment of the child's confrontation with the fact that life is not what it seems. The experience transforms the boy's perception of the world. No longer is it a place for unquestioning sensuous delight. It is a dynamic world of uncertainty. The success of the poem derives from the effective way Heaney builds up a totally convincing account of a childhood experience that deals with the excitement, pain and confusion of growing up ...read more.

Though working without a prompt to focus the response, the writer competently explores the general use of language and primary themes of Ã¢â‚¬ËœDeath of a NaturalistÃ¢â‚¬â„¢. The writer perceptively describes the authorÃ¢â‚¬â„¢s transition from the playful innocence of youth to ...

Though working without a prompt to focus the response, the writer competently explores the general use of language and primary themes of Ã¢â‚¬ËœDeath of a NaturalistÃ¢â‚¬â„¢. The writer perceptively describes the authorÃ¢â‚¬â„¢s transition from the playful innocence of youth to the burdensome awareness of maturity, as represented through the metaphorical Ã¢â‚¬Å“DeathÃ¢â‚¬Â referred to in the title (a point sadly not included in the essay!).

The writerÃ¢â‚¬â„¢s analysis is proficient and shows a sensitive awareness of the subtext of the poem, though on occasion the writer needs to refer to the text more often to support their comments. The significance of the sharp change in tone between stanzas is explored well, though again reference to the text, (perhaps to the initiation of a semantic field of violence/battle and fear with Ã¢â‚¬Å“rankÃ¢â‚¬Â and Ã¢â‚¬Å“angryÃ¢â‚¬Â, or the harshness conveyed through the alliteration of Ã¢â‚¬Å“coarse croakingÃ¢â‚¬Â) would have helped to support the writerÃ¢â‚¬â„¢s claims and show a deeper understanding of the text. Though interesting, the writerÃ¢â‚¬â„¢s comments occasionally perhaps stray too far from the text into personal speculation, which is unlikely to gain many marks in an exam, but will waste valuable time. Adherence to a clear Ã¢â‚¬Å“Point-Evidence-ExplainÃ¢â‚¬Â structure will help all but the most able of candidates (to whom this may still be advisable, but may choose to otherwise express their ideas) to convey their thoughts clearly and with adequate textual reference. The writerÃ¢â‚¬â„¢s structure is generally good however, with a clear and concise introduction and a strong conclusion.

The quality of writing is generally excellent. Spelling, punctuation and grammar are very accurate. Communication is aided through complex and varied sentences, along with a rich vocabulary. Though a minor criticism, it is generally bad practice to ask questions in academic essays; remember, the examiner wants to you answer questions, not ask them! Technical terminology is used to good effect, though the writer sometimes shows a tendency to list features, such as imagery, without fully describing their uses or effects. To further improve, the writer may include a higher level of terminology; for example the Ã¢â‚¬Å“weightinessÃ¢â‚¬Â described in the first stanza is better referred to as being Ã¢â‚¬ËœspondaicÃ¢â‚¬â„¢, the stressed syllables (Ã¢â‚¬ËœspondeesÃ¢â‚¬â„¢) creating the weighty effect noted by the writer.