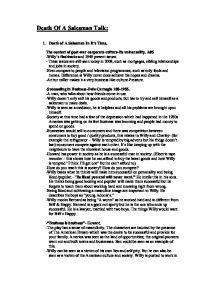 DEATH OF A SALESMAN

Death Of A Salesman Talk: 1. Death of A Salesman In It's Time. The context of post-war corporate culture-Its universality. A05 -w***y's flashbacks and 1949 present issues. - These issues are still seen today in 2008, such as mortgages, sibling relationships and jobs in society. -Even compare to people and television programmes, such as only fools and horses. Difference is w***y never does achieve his hopes and dreams. -Arthur miller makes it a very business like culture-Pressure. -Succeeding in Business-Dale Carnegie 188-1955. -A man, who talks about how friends come in use. -w***y doesn't only sell his goods and products, but has to try and sell himself as a salesman to make deals. -w***y is seen as a mediator, he is helpless and all his problems are brought upon himself. -Society at this time had a fear of the depression which had happened in the 1930s America was getting on its feet business was booming and people had money to spend on goods. -Businesses would sell to consumers and there was competition between consumers to buy good / quality products, this relates to w***y and Charley- (for example the refrigerator - w***y is tempted by big adverts but his fridge doesn't last) consumers compete against each other. It's like keeping up with the neighbours to have the showiest house and goods. ...read more.

- Emptiness and determination are themes. - Happy and Biff seem incapable of rowing up, they still see themselves as children. Biff sees himself as a kid after finding his father in the hotel room with the other woman. He's uncut in his own imagination. - Biff Loman is influenced and stunted by his own father-w***y, says he'll be different and grow up from his father, we get the sense he actually won't. Biff and Happy have seedy and cheesy dreams-Loman Brothers. - Sons reflect positive and negative of w***y their father. - Biff=Failure like his father? - Odd statements that only make sense in his own mind, he won't acknowledge he has problems. His language is a breakdown and out of touch with his reality. - "I'll whip you" violence in his language and a physical father figure. - He's a Death Of A Salesman Element. 3. Is it a Tragedy? - Flaw in the hero's character is needed to be a Shakespearian hero. - Different definitions in the dictionary argue and compare the meaning. - Tradgey: Indiviual of society/hero suffers a decline. - Hubris- exessive pride/over confidence. - Hero-faiing and undermining their quest. - Hero-in heart knowledge and recognition of themselves. - Loose kingly status or in Death of a Salesman his status of a salesman. - w***y's death isn't of his own mistakes but of society he finds himself in, the constant pressure. ...read more.

- Miller makes it clear that both Biff and Happy are disrespectful of women, but on the other hand have a romantic view and want to settle down with a women like their mother. - Linda is seen as the angel in the house. - Treated with some respect. - To what extent is Linda to blame? - Linda is too loving and protects and loves w***y too much. Even when he's wrong on a viewpoint, she knows it and keeps quiet. - De-stressing, as Linda takes this abuse and puts w***y before everyone, including her sons. She looses Biff as a result of w***y. - Linda is characterised as wife and mother. - She isn't foolish etc, but included in w***y's foolish behaviour. - All the boy characters seem to be fake and phoney. - Linda is very passive - In the first act, Linda has an influence on a living changing decision w***y had to make. - Linda is a realist. - Protecting w***y from the dangers unknown in the world. - w***y feels he lost out on his dreams because of Linda. - Bitter to her because of this? Or the affair? - Why did Linda stop him from going? - Suggestion that Linda wasn't part of this dream - Would be left behind - Loose protection and family around her - Financial security - No room for female characters - Fantasy is in the wilderness and is masculinity excluding women. - Household role. - Linda is suffocating w***y from excitement and dreams. ...read more.