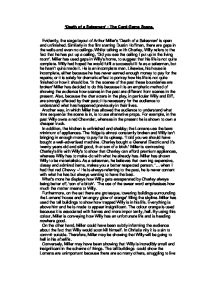 Death of a Salesman Essay

'Death of a Salesman' - The Card-Game Scene. Evidently, the stage layout of Arthur Miller's 'Death of a Salesman' is open and unfinished. Similarly in the film starring Dustin Hoffman, there are gaps in the walls and even no ceilings. Whilst talking with Charley, w***y refers to the fact that he has put up a ceiling, 'Did you see the ceiling I put up in the living room'. Miller has used gaps in w***y's home, to suggest that his life is not quite complete. w***y had hoped he would fulfil a successful life as a salesman, but he hasn't quite made it. He is an incomplete man. Likewise, his house is incomplete, either because he has never earned enough money to pay for the repairs; or it is solely for dramatic effect to portray how his life is not quite finished or how it should be. 'In the scenes of the past these boundaries are broken' Miller has decided to do this because it is an emphatic method of showing the audience how scenes in the past are different from scenes in the present. Also, because the characters in the play, in particular w***y and Biff, are strongly affected by their past; it is necessary for the audience to understand what has happened previously in their lives. ...read more.

'What're you lookin' so anaemic about, Bernard?' By referring to Bernard as an anaemic, w***y is suggesting that he studies too much Miller is displaying how many people in America have a false image of how wonderful life can be: the typical 'American Dream' that the government portrays as being a mandatory fact of living in a capitalist nation. In the scene where w***y is playing cards with his neighbour Charley, the props that Miller uses are key dramatic devices that subtly inform the audience about aspects to do with w***y's life that are not necessarily spoken. The playing cards represent the fact that throughout w***y's career in sales, he has been gambling. If he had worked hard at school and got a high-paid safe job, like Bernard turns out to achieve, he wouldn't be in the insecure position that he finds himself - on commission. Unlike Charley, who has a better job, more money, and the fact that the actor used in the film is overweight, suggests that he has a lot of money to spend on food and luxury beverages. Charley knows he is more important and successful than w***y. ...read more.

That's my build!' This proves how he is easily frustrated. From the start, Miller builds up the feeling of anxiety; he shows that w***y has a very short temperament, so all he needs is one slight irritation and he will go let out all his feelings and emotions. On the whole, Miller has used the card game scene as a way of showing the audience how the business world has affected w***y psychologically. By showing him going mad and schizophrenic, the audience can feel for w***y and are given an insight into the harsh reality of the so called 'American Dream'. In particular, Ben is a powerful, dramatic device, because not only does he allow the audience to understand w***y's mental problems, but he is a strong example of what w***y dreams are all about. However, by conveying Ben as a mystical ghost-like character, it confirms the notion that it is exceedingly difficult to be a success in the world of business; it is not simply a mandatory aspect of living in America. Personally, I believe 'Death of a Salesman' is necessary in today's culture, because it shows how hard life can really be in the business and social world. For me, this play has been influential in displaying how you cannot cruise through life easily. You actually have to work hard to achieve something. ...read more.