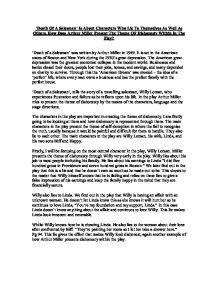 'Death Of A Salesman' Is About Characters Who Lie To Themselves As Well As Others. How Does Arthur Miller Present The Theme OF Dishonesty Within In The Play?

'Death Of A Salesman' Is About Characters Who Lie To Themselves As Well As Others. How Does Arthur Miller Present The Theme OF Dishonesty Within In The Play? 'Death of a Salesman' was written by Arthur Miller in 1949. It is set in the American states of Boston and New York during the 1930's great depression. The American great depression was the greatest economic collapse in the modern world. Businesses and banks closed their doors, people lost their jobs, homes, and savings, and many depended on charity to survive. Through this the 'American Dream' was created - the idea of a 'perfect' life, where every man owns a business and has the prefect family with the perfect house. 'Death of a Salesman', tells the story of a travelling salesman, w***y Loman, who experiences frustration and failure as he reflects upon his life. In the play Arthur Miller tries to present the theme of dishonesty by the means of the characters, language and the stage directions. The characters in the play are important in creating the theme of dishonesty. I am firstly going to be looking at them and how dishonesty is represented through them. The main characters in the play present the theme of self-deception in where the fail to recognise the truth, usually because it would be painful and difficult for them to handle. ...read more.

"How can he find himself on a farm? Is that a life?" w***y's opinions on his boys turn their relationships sour. Arthur Miller uses Linda to present dishonesty in many ways. Linda lies to w***y about knowing about his suicide attempts. We find out this when Linda reveals this to Happy. "And behind the fuse-box - it happened to fall out - was a length of rubber pipe." This gives the effect of Linda showing some superiority over w***y after w***y make Linda look feel feeble. She shows that she isn't as naive as w***y thinks she is. She conceals these things to w***y because she loves him and doesn't want to hurt him. She also knows about w***y earning and that he is not making as much money as he makes out to her. "When he has to go to Charley and borrow fifty dollars a week and pretend to me that its his pay. " She does this to w***y as she does truly love him, and knows that he cares deeply about Biff and Happy. However, she knows that w***y doesn't treat her well, but ignores this, even when Biff acknowledges her about this. "Stop making excuses for him! He always, always wiped the floor with you. ...read more.

The flashbacks are used during parts of the play to show the audience another part of the play. There are many flashbacks used in the play. The flashbacks are used during parts in the play where Miller needs to reveal new information to the audience. This information usually includes lies and dishonesty. Lies that are revealed to the audience are shown from the beginning of the play. The first flashback occurs after w***y has come home and after Biff and Happy have talked about their futures. The scene then goes back to when Biff and Happy are a lot younger. w***y gives the boys a new punching bag. Overall, the play provides a moral. This moral is that although white lies can sometimes be good, people should make sure that they don't go too far. We can see this throughout the book through the language, stage directions, character and through the techniques of flashbacks and motifs. Lies play a central part in the play as the story is based around lies and deception and without them there would not be a story. The lies are eventually given away and truth is revealed when the characters go too far with the lies. Also, the play focuses heavily on the idea of the American dream isn't always possible and at times reality is better, although that isn't what the characters in the play want to hear and refuse to believe it. ...read more.