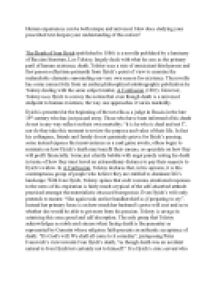 Death of Ivan Ilyich. s an audience, we begin to form a view of how repellant a man Ilyich was. He married as it was seen as a necessity to advance ones career, yet he does not love his wife

Ã¯Â»Â¿Human experiences can be both unique and universal. How does studying your prescribed text deepen your understanding of this notion? The Death of Ivan Ilyich (published in 1886) is a novella published by a luminary of Russian literature, Leo Tolstoy, largely deals with what he sees as the primary peril of human existence; death. Tolstoy uses a mix of omniscient third person and first person reflections primarily from Ilyichâ€™s point of view to examine the melancholic elements surrounding our very own reason for existence. The novella has some connectivity from an earlier philosophical autobiographic publication by Tolstoy dealing with the same subject matter, A Confession (1882). However, Tolstoy uses Ilyich to convey the notion that even though death is a universal endpoint to human existence, the way one approaches it varies markedly. Ilyich is presented at the beginning of the novella as a judge in Russia in the late 19th century who has just passed away. Those who have been informed of his death do not in any way reflect on their own mortality: "it is he who is dead and not Iâ€, nor do they take this moment to review the purpose and value of their life. ...read more.

He married as it was seen as a necessity to advance oneâ€™s career, yet he does not love his wife and deems her to be a â€œdepressiveâ€ agent whom he needs to be quarantined from. Consequently, Ivan immerses himself in his work and playing bridge. He is no better than his peers introduced in chapter one and as such it is difficult for an audience to develop empathy for his character. Ironically, the inscription embroidered onto all his suitcase respice finem, means "consider the end,â€ which he and his peers avoid through their day to day jockeying for a life befitting their bourgeois standing. One might also consider his use of this Latin phrase is simply a means for Ivan to stamp his superiority upon others â€“ the words do not result in a cognitive awakening within him. But we need to remember that Ilyich is a character that has been constructed by Tolstoy to rouse the reader from his/her spiritual slumber and abandon Ivanâ€™s shallowness. For instance, for all the time and money spent on decorating his new home, â€œthe end result was his house was so like the othersâ€¦but to him it all seemed to be quite exceptional.â€ Again, Tolstoyâ€™s caustic irony highlights the bourgeoisâ€™ myopic inability lead a life â€œwithout liesâ€. ...read more.

The intensified suffering long after the fall appears to provide him with pinpoint acuity allowing for â€œa sense of enlightenment.â€ Moments prior to his death Ilyich comes to realise: â€œThere was no fear because there was no death. In place of death there was light.â€ Rebirth is what awaits Ilyich prompting him to declare: â€œWhat joy!â€ Then a moment of genuine sustained selflessness is revealed by Ilyich, â€˜â€œDeath is finished,â€ he said to himself. â€œIt is no more!â€â€™ He no longer is consumed by fear, hatred, resentment and self-pity. Thus, the novella is largely a tome where Tolstoy uses Ilyich to explain how each of us not seek a freedom from death, but instead embrace the notion that life is about finding a freedom to death/dying. It a story which is not unique to Russians and to one time; it crosses cultural beliefs and has a timelessness making it relevant for all ages. Each one of us will encounter our unique moment when we hopefully release ourselves from a fear of death and live a life without the senseless pursuit of material liabilities, or be devoured by oneâ€™s career and status that is then defined by insincere relatioships. ...read more.