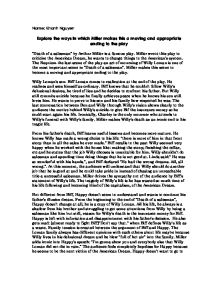 Death of salesman- The Requiem. Explore the ways in which Miller makes this a moving and appropriate ending to the play

Name: Khanh Nguyen Explore the ways in which Miller makes this a moving and appropriate ending to the play "Death of a salesman" by Arthur Miller is a famous play. Miller wrote this play to criticize the American Dream, he wants to change things to the American's system. The Requiem-the last scene of the play-an act of mourning of w***y Loman is one of the most important scene in "Death of a salesman". Miller makes this scene to become a moving and appropriate ending to the play. w***y Loman's son- Biff Loman comes to realization at the end of the play. He realizes and sees himself as ordinary. Biff knows that he couldn't follow w***y's delusional desires, he tired of lies and he decides to confront his father. But w***y still commits suicide because he finally achieves peace when he knows his son still loves him. He wants to prove to his son and his family how respected he was. The last conversation between Ben and w***y through w***y's vision shows clearly to the audience the motive behind w***y's suicide-to give Bif the insurance money so he could start again his life. Ironically, Charley is the only mourner who attends to w***y's funeral with w***y's family. Miller makes w***y's death as an ironic end to his tragic life. From his father's death, Biff learns useful lessons and becomes more mature. ...read more.

Happy doesn't want to go to the West with his brother, what he is going to do is keep doing salesman and proving to everybody that his father's dream is not a failure and he is going to be a successful salesman which is an unrealistic goal for his life. In my opinion, sympathy is pulled out from the audience at this point because they know that w***y did die in vain. w***y Loman convinced himself that after his death, his insurance money would go to Biff but actually his life insurance policy doesn't cover suicide. It is impossible to prove that w***y did not die in vain like Happy said. What have been happened with w***y and Happy makes the audience have to think deeply and this is how Miller makes the requiem as a moving and appropriate ending to the play. Miller makes a twist in ironic. The fact is w***y decides to suicide because of the financial problem and he wants to prove to his sons that his life is worth something but after all his death is a failure. No one comes to his funeral but his closest friend- Charley. All of his life, w***y aspired to be like Dave Singleman who could make money at the age of eighty and had lots of businessmen came to his funeral but w***y's death is absolute contrast to Dave Singleman. ...read more.

At the end she says her last words with w***y's grave: "We are free...we are free..". This scene creates sadness to the audience. They feel not only sympathy with Linda but also feel sad like her. Miller ends his story with the image which he brings in at the beginning: "the hard towers of the apartment building." This reveals the capitalism that the city doesn't care about w***y's death, life still moves on. The requiem left behind several unanswered question for the audience: Did Linda find out about the woman before w***y's death?, Will Happy be success? Will Biff do what he want to do?, etc. Miller makes this ending on purpose, he wants us to think, to take and learn lessons through this tragedy. Death of a Salesman is a true criticism of the American Dream. Miller plot reveal the wrong points of the American Dream. w***y who is an average person and hard-working but doesn't achieve success and w***y is the character who represents for everyman's figure. All he wants is pursuit happiness but the American Dream is an unattainable goal for average people and actually very few people makes it to the top. Focusing your life into wealth and material things makes your world become materialistic. The American Dream can destroy people and their families. This is what Miller wants to say through the requiem and he does make this a moving and appropriate ending to the play. ...read more.