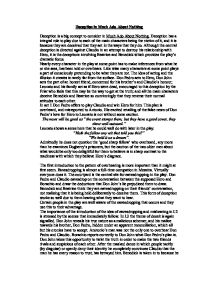 Deception in Much Ado About Nothing

Deception in Much Ado About Nothing Deception is a big concept to consider in Much Ado About Nothing. Deception has a integral role to play due to each of the main characters being the victim of it, and it is because they are deceived that they act in the ways that they do. Although the central deception is directed against Claudio in an attempt to destroy his relationship with Hero, it is the deceptions involving Beatrice and Benedick which provides the play's dramatic focus. Nearly every character in the play at some point has to make inferences from what he or she sees, has been told or overhears. Like wise many characters at some point plays a part of consciously pretending to be what they are not. The idea of acting and the illusion it creates is rarely far from the surface- Don Pedro acts to Hero, Don John acts the part of an honest friend, concerned for his brother's and Claudio's honour; Leonato and his family act as if Hero were dead, encouraged to this deception by the Friar who feels that this may be the way to get at the truth; and all the main characters deceive Benedick and Beatrice so convincingly that they reverse their normal attitudes to each other. In act 1 Don Pedro offers to play Claudio and win Hero for him. ...read more.

After the masked dance in which people tacitly (by disguise) or openly deny their identity he completely convinces Claudio that the man he has every reason to trust, has betrayed him. Benedick is taken in to because he trusts Claudio, his friend. The matter is only straightened out by Don Pedro himself and the public betrothal of Hero to Claudio. In a parallel case, Don Pedro's initial acting the part of Claudio to win Hero puts down a marker for his second, greater, plan of deceiving Benedick and Beatrice into 'a mountain of affection th'one with th'other'. The basis of both plots is getting the victims to overhear other people speaking, as they think, honestly. Therefore we are being presented with two types of deceit, that which is compassionate, like Don Pedro's or the Friar's, and that which is totally destructive, like Don John's. The success of each type of deceit depends on a manipulation of language and an alteration of behaviour and appearances, and also on the readiness of the victims to judge from what is presented to their eyes and ears. Beatrice and Benedick have both played a role so long that their associates have come to expect it of them. The whole joke of Don Pedro's plot depends on the assumption that the two are virtually irreconcilable to each other. ...read more.

In the end, deceit is neither purely positive nor purely negative: it is a means to an end. It is a way to create an illusion that helps one succeed socially. These examples of deception work particularly well to an observing audience. It is interesting to see how each character behaves or responds. The play is full of dramatic irony in that we know characters are being deceived whilst they do not know that they are being so. This is rather amusing in certain cases, such as with Benedick and Beatrice. However it is rather distressing when we see what happens to Hero as a result of malevolent deception. We know she has been disgraced, and we can only watch helplessly as the love between Claudio and Hero deteriorates. When filming various scenes concerning deception, such as the ones where people are wearing masks to conceal their identity, one must make it clear to the audience that a character is being deceived. It is quite absurd to think that someone could be fooled simply by a mask, and so it is important that the whole event is believable. There are more things to consider when filming these scenes that are not too important to consider in a book, such as the positioning of characters. .e.g. Whilst eavesdropping Benedick needed to be in a place where he could hear people talking but they could not see him, and when we saw Borachio and 'Hero' together, the women had to look like Hero in order for it to be believable. ...read more.