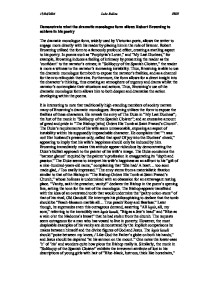 Demonstrate what the dramatic monologue form allows Robert Browning to achieve in his poetry The dramatic monologue form, widely used by Victorian poets, allows the writer to engage more directly with his reader by placing him in the role of listener. Robert Browning utilised the form to a famously profound effect, creating a startling aspect to his poetry. In poems such as "Porphyria's Lover," and "My Last Duchess," for example, Browning induces a feeling of intimacy by presenting the reader as the 'confidant' to the narrator's crimes; in "Soliloquy of the Spanish Cloister," the reader is more a witness to the narrator's increasing instability. Thus, Browning is able to use the dramatic monologue form both to expose the narrator's frailties, and as a channel for them to relinquish their sins. Furthermore, the form allows for a direct insight into the character's thinking, thus creating an atmosphere of urgency and drama whilst the narrator's contemplate their situations and actions. Thus, Browning's use of the dramatic monologue form allows him to both deepen and dramatise the action developing within the poems. It is interesting to note that traditionally high-standing members of society narrate many of Browning's dramatic monologues. Browning utilises the form to expose the frailties of these characters. He reveals the envy of The Duke in "My Last Duchess"; the l**t of the monk in "Soliloquy of the Spanish Cloister"; and an excessive amount of greed and pride in "The Bishop [who] Orders His Tomb at Saint Praxed's Church". ...read more.

Similarly, the monk in "Soliloquy of the Spanish Cloister" exhibits the irreverent attribute of l**t in his descriptions of young girls with hair of "Blue-black, lustrous, thick like horsehairs," and possession of a "scrofulous French novel." Thus, the tones of the dramatic monologues are such that the listener is exposed to the frailties of the characters through the intimacy of their narration. The intimacy is most startling when Browning goes further, exposing the sins as well as the frailties of his characters. The monk of "Fr� Lippo Lippi" admits his gallivanting, the bishop of "The Bishop Orders His Tomb at Saint Praxed's Church" admits theft, and Porphyria's lover admits murder. The tone of each narrator's description reveals much about their character; Porphyria's lover's is brutal in its coolness, and Fr� Lippo Lippi's humorous in its light-heartedness. However, the tone of the revelations in "The Bishop Orders His Tomb at Saint Praxed's Church" is perhaps the most interesting. Revealing that he stole a "lump... of lapis lazuli" after a fire at the church, the Bishop's admission is broken by "Ah God, I know not, I!" and, again, "Ah God!" as if he finds simply discussing his sins deeply painful. However, the Bishop appears reassured when he considers the splendour of the stolen item, "Big as a Jew's head cut off at the nape, / Blue as a vein o'er the Madonna's breast." Further, the blasphemy of his consternation reveals his intrinsically irreverent outlook. ...read more.

In "Porphyria's Lover," for example, the dramatic monologue form allows Browning to explain the twisted logic of Porphyria's murderer, and to ensure that the fatal moment is retold in the most dramatic way possible. The lover is not motivated by mindless cruelty. Rather, he wishes to preserve "That moment" in which "she was mine, mine, fair,/ Perfectly pure and good." Browning exploits the monologue form to describe the complications of the murderer's contemplation. In doing so, the moment of impact is lengthened, and thus its drama heightened. "I debated what to do," the lover reveals. Once he had "found/ A thing to do," it is several lines before the action is revealed. "And strangled her" is the poem's most dramatic line, affording it a line of its own. In describing Porphyria as "little" before the crime and "as a shut [flower] bud" after it, the sin is further compounded. Thus, the monologue form is essential in both explaining and dramatising the actions of Browning's narrators. In using the monologue form so frequently, Browning develops an intimate relationship with his readers through the narrators. The reader acts as 'confidant' to the narrators' crimes, and as witness to their frailties. Further, the action is dramatised by the monologues' ability to draw out the poems' most crucial moments. Thus, Browning creates a profoundly accessible element to his poetry. The Victorians who once criticized his "incomprehensible and unapproachable" poetry might well regret their words. 15/04/2004 Luke Bullen FHH ...read more.