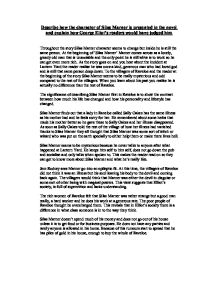 Describe how the character of Silas Marner is presented in the novel and explain how George Eliot's readers would have judged him Throughout the story Silas Marner character seems to change but inside he is still the same person. At the beginning of 'Silas Marner' Marner comes across as a lonely, greedy old man that is unsociable and the only point he is still alive is to work so he can get even more rich. As the story goes on and you hear about the incident at Lantern Yard the reader realise he was once a kind, generous man who had loved god and is still that same person deep down. To the villagers of Raveloe and the reader at the beginning of the story Silas Marner seems to be really mysterious and odd compared to the rest of the villagers. When you learn about his past you realise he is actually no difference than the rest of Raveloe. The significance of describing Silas Marner first in Raveloe is to show the contrast between how much his life has changed and how his personality and lifestyle has changed. Silas Marner finds out that a lady in Raveloe called Sally Oakes has the same illness as his mother had and he feels sorry for her. ...read more.

Silas Marner's friendship with William Dane is really strong they seem to be very close and care about each other. This reveals that his character is very trusting and trusts William a lot. William Dane then betrays Marner and Silas's reaction shows that really he knew that Dane was not as trusting as he made out to be because he knew it was Dane that had stolen the money as soon as he'd been framed for it. When Silas Marner is in Raveloe he does not go to church this is very significant as party of the story and to the reader because it shows how his character has changed from a god-lover to a god-hater because he believes if there was a god he would have saved him from being framed. He seems like a completely different person when he goes to Raveloe he is quiet, mysterious and obsessed with money the complete opposite of what he was like in Lantern Yard. Silas Marner works hard in Raveloe as he has no friends and does not want to socialise or go to church he works a sixteen hour day and because he doesn't have to give any of his money away he soon builds up a lot of money and becomes very rich. ...read more.

George Elliot surprises the readers by making Marner not care. Marner's reaction is that he's glad to have his money back but it does not change his personality at all. All Marner thinks about the money is that it will help him and Eppie have a better life. Marner is a very trusting, honest man that is very humble to people and sensitive. He very loves others especially Eppie. He is very caring and also very forgiving. Marner does not have very many negative qualities he used to have some before Eppie came into his life like he was very unsociable and completely obsessed with money. When Eppie comes into Marner's life he loses all his negative qualities and enhances his good ones. I feel that Marner as a character is a very loving person who would never hurt anyone and genuinely a friendly kind man. The only reason I think he acted badly when he got banished from lantern yard because he had been badly betrayed and did not have anything to live for but inside all the time he was the same trusting, honest, humble, sensitive, loving, caring and forgiving person he was at the beginning of the story and the end. This is how I also feel Eliot's readers would have thought about Marner as a character. ...read more.