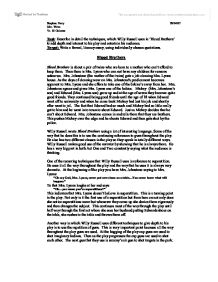 Describe in detail the techniques, which Willy Russell uses in &amp;#145;Blood Brothers&amp;#146; to add depth and interest to his play and entertain his audience.

Task: Describe in detail the techniques, which Willy Russell uses in 'Blood Brothers' to add depth and interest to his play and entertain his audience. Target: Write a formal, literacy essay, using individually chosen quotations. Blood Brothers Blood Brothers is about a pair of twins who are born to a mother who can't afford to keep them. Then there is Mrs. Lyons who can not have any children for reasons unknown. Mrs. Johnstone (the mother of the twins) gets a job cleaning Mrs. Lyons house. As the days of cleaning wear on Mrs. Johnstone's predicament becomes apparent to Mrs. Lyons and she offers to take one of the babies's away from her. Mrs. Johnstone agrees and gives Mrs. Lyons one of the babies. Mickey (Mrs. Johnstone's son) and Edward (Mrs. Lyons son) grow up and at the age of seven they become quite good friends. They continued being good friends until the age of 18 when Edward want off to university and when he came back Mickey had lost his job and shortly after went to jail. ...read more.

Another way in which Willy Russell uses different techniques to give depth to his play is to use the repetition of guns. This is very important point because all the way throughout the play guns are used. At the begging of the play cap guns are used to shot imaginary Indians. Then as the play progresses the cap guns are used to shot each other. The next gun that they use is sammy's air gun to shot targets in the park. The next step is to use a real gun to rob a filling station. That is where the first fatality is. "An alarm bell is heard, followed by an explosion from the gun." The next time that gun's are used is at the very end when Mickey shoots Edward. Shortly after that Mickey him self is shot by the police. "Nobody move, please. It's all right, it's all over, just stay where you are. This shows that as they grow up, the guns that they use increase in firepower. A third technique that Willy Russell uses to give depth to Blood Brothers Is to use the narrator to jump three years in about three minutes. ...read more.

What?" All of this has given her enough time to think of something that she thinks will make sure that no one ever knows the truth, They say...they say that if either twin leans that he once was a pair, they shall both immediately die. It means, Mrs. Johnstone, that these brothers shall grow up, unaware of the existence. They shall be raised apart and never, ever told what was once the truth. You won't tell anyone about this, Mrs. Johnstone, because if you do, you will kill them." This shows that Mrs. Lyons is well able to manipulate the truth in her favor. The way in which the end of the story is told at the begging is a clever technique to use because the audience knows what will happen but they don't know how it will happen. At the begging of the story Mrs. Johnstone says, "An, did y' never hear of the mother, so cruel, There's a stone in the place of her heart? Then bring her on and come judge for yourselves How she came to play this part." This is saying to the audience that you have been told the end of the story and now you can make your own judgment on who was in the wrong. ...read more.