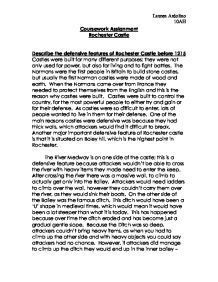 Describe the defensive features of Rochester Castle before 1215.

Coursework Assignment Rochester Castle Describe the defensive features of Rochester Castle before 1215 Castles were built for many different purposes; they were not only used for power, but also for living and to fight battles. The Normans were the first people in Britain to build stone castles, but usually the first Norman castles were made of wood and earth. When the Normans came over from France they needed to protect themselves from the English and this is the reason why castles were built. Castles were built to control the country, for the most powerful people to either try and gain or for their defense. As castles were so difficult to enter, lots of people wanted to live in them for their defense. One of the main reasons castles were defensive was because they had thick walls, which attackers would find it difficult to break. Another major important defensive feature of Rochester castle is that it is situated on Boley hill, which is the highest point in Rochester. The River Medway is on one side of the castle; this is a defensive feature because attackers wouldn't be able to cross the river with heavy items they made need to enter the keep. After crossing the river there was a massive wall, to climb to actually get only into the Bailey. ...read more.

As John was such an evil King he left Arthur in a tower for a long time and then tied a rock to Arthur's hand and threw him in the river. After Arthur's death, the war went from bad to worst for John and by 1204 he abandoned Normandy and fled back to England. King John never really got over the loss of Normandy, but no matter how hard he tried, he couldn't get his land back. But the more he tried, the more the Barons and 'great nobles' grew annoyed back in England. John was so greedy and wanted more money from the Barons so he could keep fighting, and he wanted them to come over from England to help him personally in his wars. So in 1205 John met with his Barons and was still constantly asking them to come and help him in winning his lands back. After eventually losing Normandy, John couldn't feel he could trust his Barons and gave more of the important jobs in England to the poor foreigners because he thought they would be grateful to him. This made the Barons even less happy with John. John spent a lot of time arguing with the church leaders. It was unfortunate for John that the Pope at that time was very strong minded as well. ...read more.

In 1237 his stable and tow gates were repaired and in 1239 the chapel was whitewashed and a 'Christ in Majesty' mural repainted. This made the castle more decorative and more residential. In 1254, an external flight of stairs was ordered, so that access to the chapel need not be through the King's own apartments. The roof of the Castle was more comfortable and it was stronger and less flammable than the wood, so therefore this was another defensive feature. However, as it was made of lead it would retain heat. Around the 1300's the castle declined being so comfortable and residential, and it was just not comfortable for the people to live in. This was because it was cold and it was too big to keep all the rooms heated. This therefore suggests that the changes to the comfort of the castle were not altogether successful because they did not help to make the castle more of a residential feature. The Inner and outer bailey were both defensive features and were used as a double defense against the keep. The defenders could take their animals into the inner bailey, when they were being attacked, this would give them a little more time and therefore they would have a greater supply of food in times of siege. Attackers would not know this and during a siege, they would be the first to get hungry and thirsty, as they were the ones without emergency food. Lauren Ardolino 10AH ...read more.