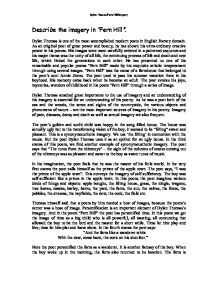 Describe the imagery in "Fern Hill". Dylan Thomas is one of the most accomplished modern poets in English literary domain. As an original poet of great power and beauty, he has shown his extra-ordinary creative power in his poems. His images were most carefully ordered in a patterned sequence and his major theme was the unity of all life, the continuing process of life and death and new life, which linked the generations to each other. He has presented us one of his remarkable and popular poems "Fern Hill" made by his exquisite artistic temperament through using several images. "Fern Hill" was the name of a farmhouse that belonged to the poet's aunt Annie Zones. The poet used to pass his summer vacation there in his boyhood. His memory came back when he became an adult. The poet evokes his joys, mysteries, wonders of childhood in his poem "Fern Hill" through a series of image. ...read more.

barley, barns, the yard, the farm, the sun, the calves, the foxes, the pebbles, the streams, the hayfields, the dew, the cock, the field etc. Thomas himself said that a poem by him needed a host of images, because the poem's center was a hose of image. Personification is an important element of Dylan Thomas's imagery. And in the poem "Fern Hill" the poet has personified time. In this poem we get the image of time as a big child who is all powerful, all wasting, all consuming that allowed the boy to be the lord and the master for a short while. Time let him play and live; time let him plat and leave alone. In the fourth stanza the poet says: "And the farm like a wanderer white With the dew, come back, the cock on his shoulder." Here the poet personified the farm as a wanderer. It is another fantasy of the boy. When the boy woke up in the morning, the farm also returned to its location. ...read more.

The word windfall means prematurely fallen. The rivers of the windfall light means that bright light falling on the apples, which had prematurely fallen down upon the ground. The word 'windfall' also means a stroke of good luck. The light falling upon the apple is regarded as a lucky chance. To the child all this is Paradise itself, the Garden of Eden where Adam and eve moved carelessly among green and golden things. To the innocent eyes of childhood, it even seems a miracle and grows big and round once more. It is the miracle of creation repeated. The horses, which flashed away into the darkness he went to sleep, appear from their ordinary stables again though the child thinks, still a little under the spell of the magic night before. And so off they go into the 'fields of praise' that is the green fields, which remind us again of God's goodness and the necessity to give thanks for it. Thus Dylan Thomas through his image convinces us of the significance and authenticity of his childhood vision. Dylan Thomas/Fern Hill/imagery ...read more.

This student written piece of work is one of many that can be found in our GCSE Dylan Thomas section.