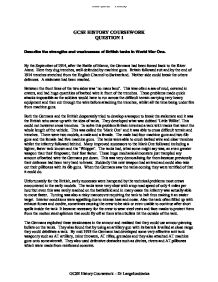 Describe the strengths and weaknesses of British tanks in World War One.

GCSE HISTORY COURSEWORK QUESTION 1 Describe the strengths and weaknesses of British tanks in World War One. By the September of 1914, after the Battle of Marne, the Germans had been forced back to the River Aisne. Here they dug trenches, well defended by machine guns. Britain followed suit and by the end of 1914 trenches stretched from the English Channel to Switzerland. Neither side could break the others defences. A stalemate had been reached. Between the front lines of the two sides was 'no mans land'. This was often a sea of mud, covered in craters, and had huge quantities of barbed wire in front of the trenches. These problems made quick attacks impossible as the soldiers would have to run across the difficult terrain carrying very heavy equipment and then cut through the wire before attacking the trenches, whilst all the time being under fire from machine guns. Both the Germans and the British desperately tried to develop a weapon to break the stalemate and it was the British who came up with the idea of tanks. ...read more.

Unfortunately for the British, early successes were hampered by the technical problems most crews encountered in the early models. The tanks were very slow with a top road speed of only 4 miles per hour but even this was rarely reached on the battlefield and in many cases the infantry was actually able to move faster. Turning was also a risky manoeuvre requiring the tank to halt thus making it an easier target. Interior conditions were appalling due to intense heat and noise. Also the tank often filled up with exhaust fumes and cordite, sometimes causing the crew to be sick or even unable to continue after short spells inside the tank It became necessary for the crew to wear steel vests and face masks to protect them from the molten steel splinters that could fly off at them when bullets hit the outside of the tank. The Germans exploited these weaknesses in the armour and realised that they could use armour piercing bullets on the tanks. They also found that by using an artillery gun with its barrels levelled at close range they could debilitate a tank. ...read more.

For example at Cambrai in November 1917, the entire British tank corps (474 tanks) breached the Hindenberg line capturing 12 miles and allowing the taking of 10,000 German prisoners, 123 guns and 281 machine guns. This land was later lost but this was through no fault of the tanks. Even the Germans had small successes with the tanks, the first main one being on 24th April 1918 at Villers Bretonneux where thirteen A7V's overran British and Australian infantry. If used in the wrong situation or on the wrong terrain it was entirely without benefit. When tanks were used in the swamp like conditions of the Third Battle of Ypres the tanks sank in the mud and were then destroyed by enemy artillery making their deployment totally useless. On the whole tanks were useful to Britain and even though losses were sustained in their early development the effects that tanks had were definitely positive. They had even greater success when used in large numbers in August 1918 when 604 allied tanks obliterated the German front line at Amiens forcing the Germans into a hasty retreat which continued until the signing of the armistice in November 1918. Max Carter - 11RHC GCSE History Coursework - Dr Langelueddecka ...read more.